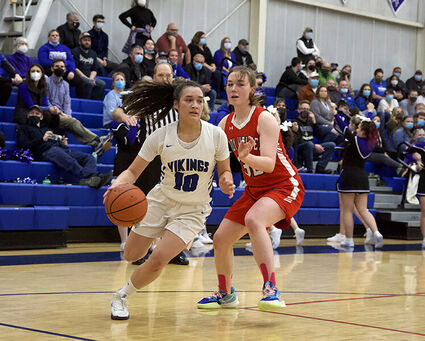 Kaili Simbahon dribbles past Aubrey Wynne as she rushes to the basket during Friday night's game against Wrangell.

The Lady Vikings faced the Lady Wolves in their homecoming games last weekend in a rematch of the previous weekend's trip to Wrangell.

Though Petersburg ultimately fell short in both games, Head Coach Dino Brock was pleased with his team's defensive performances and hopes that the intensity of the two matches will prepare them for the upcoming regional tournament.

"We struggled to keep the basketball at times and that's something we'll work on this week, but overall it was a very good weekend for us," Brock said.