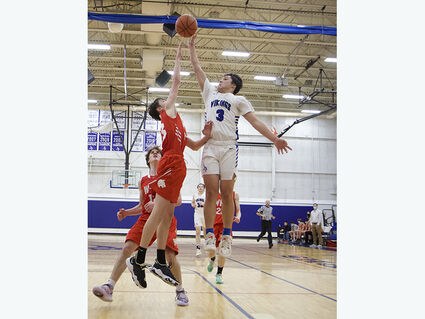 Rik Cumps leaps above Jacen Hay to get a clear shot at the basket during Saturday night's rivalry showdown.

The Petersburg High School boys basketball team took the court last weekend to battle Wrangell in a homecoming series which saw the Vikings win one and lose one.

The margin of victory in both matchups was a single possession which made for two entertaining games in front of an electrified home crowd.

The game got off to a slow start with both teams struggling to put up points until Kyle Biggers sunk two free throws and Jack Engell doubled the Vikings' lead with a layup.

The Wolves answered with...