Champion at the 46th Tanana Invitational 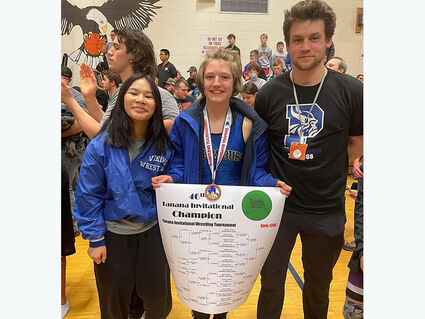 Seventh grader Abby Worhatch stands between DD Toyomura and Head Coach Mike Corl after winning her bracket at the 46th Tanana Invitational in Fairbanks on February 26.

Nine students from Mitkof Middle School attended the tournament which saw 513 middle school students, including a record 107 girls, from all sizes of schools enter the ring.

Worhatch wrestled in four matches and managed to pin each of her opponents in less than four minutes.

After beating the second-ranked wrestler in her bracket in the semifinals, Worhatch entered the championship match "cool and collected" according to Corl...