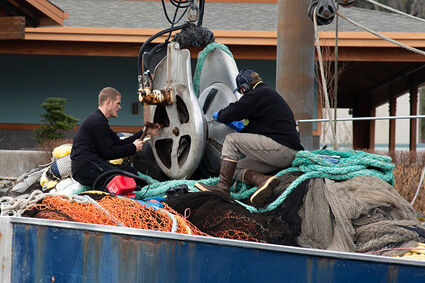 Deckhands Brett Lopez, left, and Brett Evens work on seine gear aboard the Petersburg fishing vessel Island Pride this afternoon at Crescent Harbor. Even though the volume of herring is predicted to be very high this season, only about half the Sitka Sound sac roe herring fishing fleet is expected to participate in the opening, according to Fish and Game.

Aerial surveys are conducted by Fish and Game to search for herring spawn and, if spotted, map their location and take aerial photographs.

Though no groups of herring spawn have been recorded yet, surveyors have recorded sightings of herring predators in the area.

On Tuesday, 65 sea lions were spotted off of Inner Point while a total of 27 humpback whales were seen throughout the sound.

Data collected through the surveys are a...