Murkowski speaks on funding for PMC facility, other Alaska projects 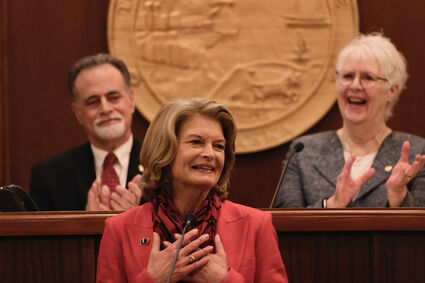 U.S. Sen. Lisa Murkowski of Alaska gives an address to a joint session of the State Legislature on Feb. 22 in Juneau. Speeches from Alaska U.S. Senators to State lawmakers are a tradition. Senate President Peter Micciche and House Speaker Louise Stutes are shown behind Murkowski.

During a conference call with reporters on Monday, Sen. Lisa Murkowski spoke on the recent passage of the Fiscal Year 2022 Consolidated Appropriations Act, which was signed into law by President Joe Biden after the call on Tuesday.

The spending bill includes congressionally dedicated spending allocations for Alaska projects including $8 million for the construction of a new Petersburg Medical Center facility.

PMC CEO Phil Hofstetter has previously said that those funds will help get the project through phase one, which consists of site selection, design, and an environmental study, to reach...