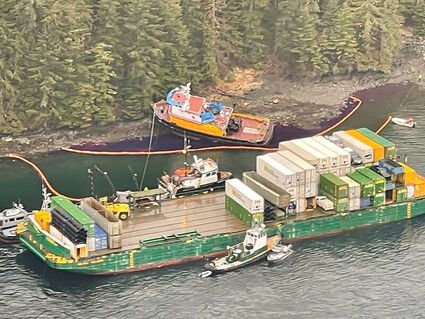 Vessels tend the Chichagof Provider while a boom contains diesel from the grounded tugboat.

The tugboat Western Mariner ran aground Monday morning while towing the barge Chichagof Provider through the Neva Strait according to the U.S. Coast Guard.

At 2:55 a.m. watchstanders in the Sector Juneau command center received a radio call from the Western Mariner stating that the 286-foot containerized barge in tow had collided with the tug, causing the tug to run aground.

According to the Alaska Department of Environmental Conservation, a temporary steering failure onboard the tugboat caused the collision.

The Coast Guard reported no injuries and all four crew members were safely transpo...