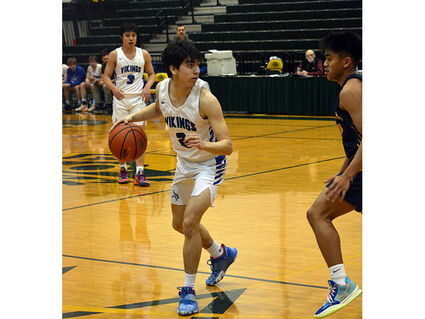 Kieran Cabral scans the court for an open teammate.

After a packed schedule which took the Vikings to some of the toughest courts across the state, the Petersburg High School boys basketball team ended its season with a sixth-place finish at the Alaska School Activities Association 2A State Tournament in Anchorage last weekend.

Though they did not fly home with a championship trophy, Head Coach Rick Brock said he was proud of his team's performance this season and the grit they showed in their final tournament of the year.

The trip to state was new for the team after not being able to go the last two years because of the COVID-19 pandemic.