After the last game of a high school career 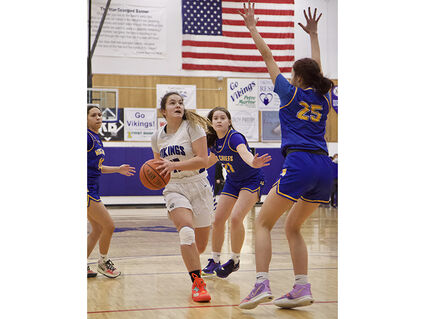 As a junior, Ines Larson helped the Lady Viking's basketball team reach the state tournament. Going into her senior year, she felt pressure to duplicate that success, so she made returning to state a top priority. But, unfortunately, the team didn't make it out of regionals.

Two weeks ago, seconds into what would be her last high school basketball game, Larson went to intercept a pass and stepped on an opposing player's foot, rolling her ankle in the process. She had dealt with ankle injuries before, but this was different.

"My first thought was, last year this happened to me, too, the same thing, and I was thinking I was going to be okay," she says. "Then I tried getting up, and I couldn't walk, and I knew it wasn't good."

She required the aid of others to reach the bench. And there she would remain, until the final minutes of the game.

"Being on the bench was hard, it was really hard, but knowing I couldn't do anything, playing wise, I knew I had to be there for my team," Larson says. "I knew I had to cheer them on and help them out, because it's not easy seeing one of your players on the bench, hurt."

The team fought back in the second half and, in thrilling fashion, even forced overtime. But the Lady Vikings couldn't maintain their momentum.

With two minutes to go in OT, and the other team heading to victory, Larson's head coach Dino Brock let her check in and finish her career on the court with her teammates. Brock says, she deserved to be out there and he wanted her out there.

"The reaction, when she came back on the floor, from everybody was pretty cool," he says. "The crowd, our team, everybody, it was a pretty good moment, a pretty special moment."

Larson says, before the final whistle blew, she shared a look with her three fellow seniors, as if they were nonverbally telling each other, "That was it, that was our last one."

This season might not have ended the way the Lady Vikings had hoped, but give it some time and the losses really won't matter. At least that's the way their head coach with three decades of service thinks.

"You hear coaches all the time say, 'In 10 years you won't remember your record, you'll remember the memories," Brock says. "And that's so true."

For Larson, basketball has been all about learning who she is and learning how to interact with others in order to create lasting bonds. Senior night with her teammates is a moment she will cherish forever.

"We had such a fun time," Larson says. "We were cheering for our boys and just being ourselves."

She had offers to continue her career with a couple college teams, but she felt like it was time to do something else. Larson will attend Oregon State in the fall and play club ball there.

"Basketball, even though I'm not playing competitively anymore, will always be part of my life," she says. "I just decided I'd like to keep it as a fun thing to do, and not make it my whole college experience."

Ten years ago, Carolyn Kvernvik took a similar path, choosing to focus on academics rather than pursue organized college basketball and it turned out to be the right move, for her.

She was able to keep her love of the game alive by helping to establish the first women's basketball club at Gonzaga University. This also saved her knees the wear and tear of being a college athlete.

These days, when she finds herself around women she used to play sports with, laughter about old stories and funny high school memories ensues.

"I can think of a lot of inside jokes that wouldn't make sense," Kvernvik says. "But that's the thing, there are so many inside jokes, so many little things, that I'll always remember."

Her senior season, Kvernvik thinks the team only recorded one victory, losing many games by five points or less. The last trip the team took together was to Ketchikan and Kvernvik ended her career at regionals, on the court in a losing effort.

"It was emotional, but good emotional, I just remember crying and hugging my team," she says. "You just start bawling because you realize, 'Welp, it's done.'"

Once the players leave the floor, they go to the locker room, and that's when the coaches talk to the team for the final time. For most, the experience is difficult. But each year a handful of student athletes and a couple coaches get to end the season with a win. And former Petersburg boys basketball player Blaine Volk knows a little something about how that feels.

In 2016, the Vikings were ranked second and lost in the state championship game. They came close, but only had tears to show for it, Volk says.

The following season, Petersburg was loaded with experience and talent. The Vikings had four seniors that were hungry to get back to the title game and find redemption.

Regular season wins came easy and so did a first place finish at regionals, but neither accomplishment mattered much. Winning state-winning their last game together-was all that mattered. And the Vikings did just that, they became state champs.

Volk refers to them as a "team of best friends." And, he says, winning the title felt more like a weight lifted off the players' shoulders than anything else, allowing them to briefly feel like the "happiest guys on earth."

"It's not something that we talk about much anymore, but we will reminisce every now and again," he says. "The games are all saved online and we'll maybe throw a game on and just watch, break down plays. He should have been here, and I should have helped on this guy, or made this pass."

Volk will always be a big fan of basketball, and he makes sure to watch any streaming Viking or Lady Viking games. He felt sickened by what happened to Ines Larson a couple weeks ago at regionals, because he had witnessed her early talent firsthand.

"When she was a middle schooler and I was in high school, we'd go play open gym, just on our own, show up at the community gym," Volk says. "And she'd come play with us, we were seniors and juniors, and she was, like, a seventh grader or sixth grader-it was crazy-she could hold her own." 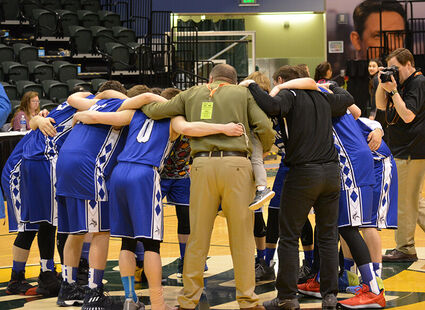 Petersburg Vikings celebrate their win at the boys basketball State Championship in the Alaska Airlines Center in Anchorage in 2017. The Vikings beat Metlakatla 46-26 to secure the 2A championship.

"She spent hours and hours and hours, preparing and making herself into an excellent ball player," he says. "Her passion for the game and her drive to get better, I don't know what word I would use ... as a coach you dream of kids like that."

Brock has 32 years of experience coaching basketball in Petersburg, and during that time two of his teams have won it all. When that happens, he says, it takes a while for the players to realized there won't be any more games, because they are too busy celebrating. But he has plenty of experience comforting young men after they leave the court and take off their jersey for the final time.

"Everybody reacts differently," he says. "As a coach it's about being there just to put an arm around them, give them a hug, sometimes you find a quiet place to talk, if they need to."