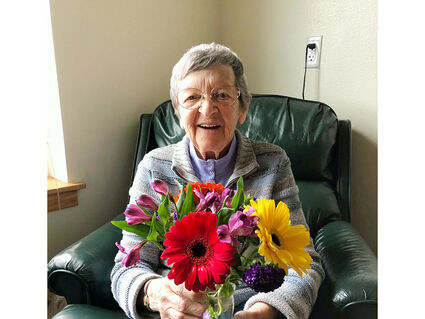 Patti was presented as a Christmas gift to her three brothers Bob, Dave and Jim. She was born in Vancouver, B.C. and came home to Petersburg in December with her parents Loyla and Earl Ohmer.

Her childhood was a happy one. She traveled to many states visiting family and friends with her mother. Summers were spent at Bum's Retreat near Green Rocks. Her father Earl would join the family there on weekends bringing the mail and groceries from town.

Her first business venture at age 12 involved taking orders for halibut cheeks. She then cut them herself and delivered them on her bicycle, raising money for a radio.

High school was busy with band, sports, skiing, The RipTide, boat trips to Pt. Agassiz and up Petersburg Creek. Basketball trips to Wrangell were aboard the Middleton. After graduation in 1947 Roxy Swenson arrived in Petersburg. That was the beginning of a 75 year friendship.

Patti got her first camera as a teen and a love of photography was born.

She documented the fun times of her life with friends and family.

She later moved to slides and documented a 10 day halibut trip aboard the Unimak with her husband Arvid. Then came the big video camcorder. Among many other things she recorded a 2 week Sitka Sound herring trip with Karen and Albie Hofstad aboard the Tonka II. She was still printing photos and making albums into her late 80's.

Patti married Arvid Ernst Norheim in 1950. They had three children, Susan, Sally and Kraig. Arvid fished halibut and painted houses. Patti joined the other Squirrel Hill mothers, Ruth, Roxy, Arliss, Esther, Doris and Agnes. It was a neighborhood full of kids. The family moved into the Ohmer house following the death of her father, Earl Ohmer.

A few years later Patti and Arvid divorced and she found herself a single mother of three. She went to work juggling part time jobs until landing a full time job as teletype and marine radio operator at Alaska Communications System. She worked there for 10 years with the wonderful Dick Pierce. He was followed by her good friend, Harvey Gilliland. That job ended in 1969 when the Air Force sold the ACS.

During these years Patti and sister-in-law Gloria Ohmer loaded their 7 kids in the back of her station wagon and headed to Lakelse Hotsprings near Terrace B.C. via the new Alaska ferry system. Swimming, horseback riding and singing in the car were highlights. These trips continued for several summers with Gloria's family driving north from Everett and other Petersburg families joining in the fun.

Her next adventure began when she and Gloria started The Cache, a variety store on Main Street. They had fun every day selling everything from popcorn and toys to carpeting and furniture. They had many long time employees who became like family. Roxy had started Lee's Clothing then and they became the three Girls on Main Street. A few years ago they were featured as such as the 4th of July Grand Marshalls riding on the fire truck. The 16 years of The Cache were busy with buying trips, trips to Dayton Ohio to visit her aunts, kids in high school and college, kids getting married and grandchildren arriving.

Patti fell in love with the islands. She had many happy winter vacations after that. Hale Pau Hana on Maui was her favorite.

Getting the first swimming pool built in Petersburg prompted Patti to run for school board in 1970. She continued to serve for 27 years. The new High school and auditorium were big projects she lobbied for. She formed many special friendships during those years with parties at her house and times at the Teacher's cabin. Governor Hickel appointed her to the state Board of Education. For those four years she traveled to all corners of Alaska.

Syd and Vara Wright became good friends. She spent many happy days aboard the Chan IV with them. Vara added the bird watchers, Patti and Gloria, to several of her Mitkof Mummers plays. They could steal the show with nary a word!

Music has been a constant joy in Patti's life. Saxophone in school, an organ in her home and for working in the yard an outside speaker on the porch. Anyone walking by her Fram Street house could enjoy her records, much to her kids' chagrin.

The Doyhof Cavaliers were formed with Norma Tenfjord and Gloria on washtub bass, Barb Short on accordion, Patti on washboard and thimbles, Albie Hofstad on spoons and Roxy on the afuche. Their signature number was Humpback Salmon.

They performed at Little Norway on Main Street and anywhere else they could. Their last performance was at Long Term Care May 2018 with Sue Pausen on accordion. Sally's husband Al Dwyer added music to every family dinner with his guitar, piano, wonderful voice and humor.

In 1980 Patti sold her house to the City to make room for the new hospital.

She built her dream house on Wrangell Narrows. She loved having her boat out in front, CB radio in the kitchen, decks and porches full of geraniums and begonias. Two special joys were her raspberry patch and her golden chain tree. Her neighbors Betty and Harry Rogers kept her in fish.

Patti started Patti Wagon Tours when she and Gloria sold The Cache. She would pick up her tourists near the Harbor Shack. She told them to look for the lady in the pink hat. She then toured them through the cannery, drove them to the salmon hatchery and then to her house where she served shrimp cocktails on her deck. She worked with many small cruise ships and loved sharing the history and beauty of Petersburg. One tour company made her a special name tag reading Patti Norheim - A living Legend.

Patti loved being active and involved. She built her fence, rock-wall and bar-b-que at her house in town. She loved fishing, getting firewood and camping up the river. Most of all she loved time with family and friends. She was a special grandma to Casey and Caryn Flint, Kristoffer, Riley and Michael Norheim and Marc Lapeyri. She was Besta to great granddaughters Cadence and Devyn Flint and Liv Gillen.

Patti stayed active until just the last few years. She worked with Beat The Odds; helping with the annual walk/run and bookmark sales. Fourth of July she sold raffle tickets in the booth for the Chamber of Commerce every year. She helped at Sons of Norway events and was presented the Norwegian-American award one year. She was a regular at the Lutheran Church always sitting right up front.

The last 4 1/2 years of her life she lived at Mountain View Manor Assisted Living. She could be seen riding in the van every afternoon in her favorite blue puffy coat. She patrolled the halls in her wheelchair. After a short illness she died at Petersburg Medical Center surrounded by her family.

Memorial Service was on April 7 and the Petersburg Lutheran Church.