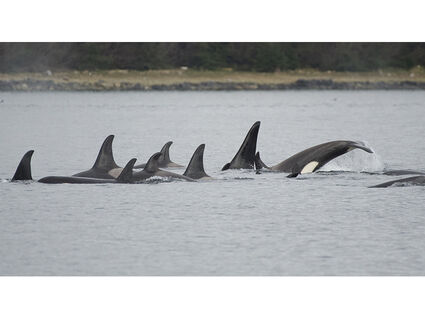 An unusually large pod of orcas was seen in Petersburg on Tuesday. The group was estimated to consist of 24 individual whales, as counted by carpenters on a roof along Hungry Point Road. Desi Burrell who has lived along Hungry Point shoreline for decades described this group as the biggest pod she has ever seen. Judging by the curvature of the dorsal fin and the size of the group, these whales likely belong to the salmon-eating Northern Resident killer whale population. This population is composed of around 300 whales and 34 matrilineal pods. The pod for Northern Resident orcas is a tightknit family unit organized around the mother. The pod forages together and shares their catch among their pod members. Mating can take place when different Northern Resident pods come together, but typically when the pods go their separate ways the new couples part ways as well and return to their family pods. Viewing orcas near Petersburg is a beloved pastime, but National Marine Fisheries Service Enforcement Officer Amy Anderson offered this reminder with regard to how confined the Wrangell Narrows can be for whales: "We want to be really careful not to trap the Orcas between a boat and the shore which could inadvertently create a stranding situation. Give the animals space. You are always closer than you think." NOAA regulations remind whale watchers to give the animals space. In general, remain at least 100 yards from marine mammals, and if approached by a whale, put the engine in neutral and allow the whale to pass.