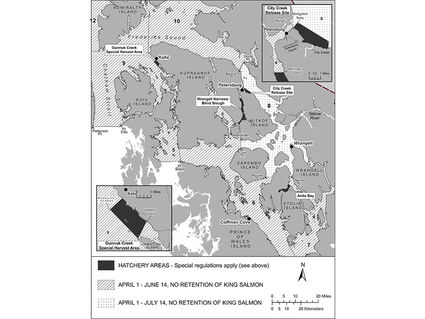 The sport fishing regulations for Alaska hatchery-produced king salmon in areas near Petersburg were announced by the Alaska Department of Fish and Game on April 19.

From June 1 to July 31, residents and nonresidents will have a bag and possession limit of two king salmon greater than 28 inches and two less than 28 inches in the Wrangell Narrows and Blind Slough terminal harvest area.

The king salmon caught in that area will also not count toward the nonresident annual limit.

From June 15 to July 14, residents and nonresidents will have a bag and possession limit of one king salmon of any s...