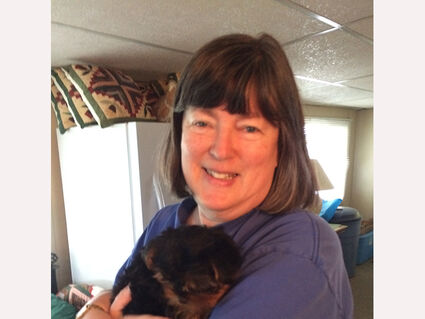 Laurel Ann Greseth passed away peacefully at her winter home in Thousand Palms, California with her family by her side after a months long battle with cancer. She had been treated by the Eisenhower Medical Center and was at home under care of Reliance Hospice.

A lifelong Alaska resident, Laurel was born to Norman and Evangeline "Vange" Tate on September 15, 1947 in Ketchikan, Alaska. She graduated from Petersburg High School in 1965.

Laurel lived a life full of adventure in Alaska-she was a fish cannery worker, a fisherwoman, a bookkeeper, a charter boat operator, a Coast Guard Auxiliary, had a Captain's license, and more. Laurel was an excellent quilter and shared her creations with family and friends. She enjoyed karaoke and performed in a band, with Dick, at various venues. Laurel and Dick also entertained family and friends, singing at home. Laurel had a wonderful sense of humor and embellished her stories to entertain everyone.

Laurel was a member of the Lutheran Church in Petersburg.

She and her husband Dick bought a home in Thousand Palms, CA. and joined the annual winter exodus as "snow birds." For over a decade, they spent winters in Thousand Palms surrounded by a wonderful and warm community of friends. Enjoying morning coffees, karaoke parties, seafood feeds, golf rounds, and general shenanigans. She was a caring and loving daughter, sister, mother, wife, and friend. She will be greatly missed by all.

Laurel was preceded in death by her parents and her sister, Norma Elizabeth "Beth" Hagerman. Left to remember her are her husband Dick Greseth, her children Cliff (Candy Boparai) and Katrina (John Gilfillan), her sister Holly Trotter (Glen Horn), her grandson Logan Connor Roundtree, her stepdaughters Cyndi (Ken Erbey) and Cheryl Greseth, and numerous nieces, nephews and cousins.

In lieu of flowers, Laurel requests donations should be directed to Petersburg Lutheran Church or Petersburg Long Term Care in Laurel's name. A celebration of life will be conducted in Petersburg at a future date. Laurel's remains will be placed in the Columbarium at the Petersburg Cemetery.