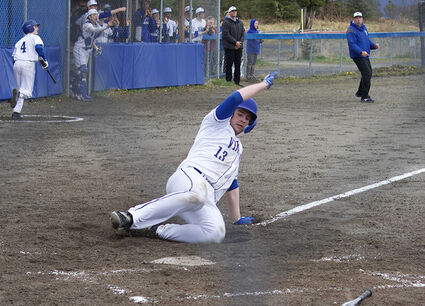 A hit by Hunter Conn sent Kyle Biggers sliding into the plate to score for the Vikings during their second game of the series versus the Falcons.

The Petersburg High School baseball team opened its first home series of the season with a commanding 13-2 win over Thunder Mountain last Thursday, but costly mistakes led to losses in both games of Friday's double header for the Vikings.

Thursday's dominant showing was the first time that Petersburg has ever won by mercy rule according to Head Coach Jim Engell.

Lathum Johnson led the team from the mound with a strong pitching performance, striking out nine batters in 4.2 innings.

"I was real pleased with Lathum's performance and then the guys just reacted behind him," Engell said. "Timely...