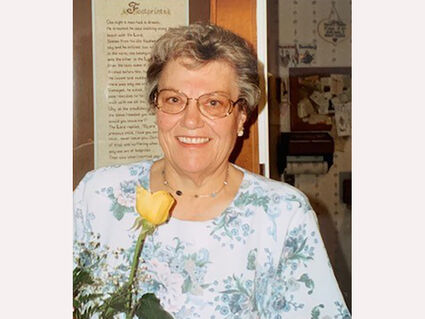 Our mother, Lois Ellen was born on August 26th, 1935 in Mandan, North Dakota to Alice and Carl Schiller. Growing up on a family farm, following the Great Depression, were challenging times in the rural Midwest: no electricity, running water or phone service. Mom could recall meager living with no money for holiday celebrations or frivolous gifts. A favorite memory was a ballpoint pen given to her when she was learning to write.

Education was extremely important to her father, and he impressed upon Lois the value of reading–knowing that this would open the door to all the adventures life had to offer. Open it did, one of Mom's earliest recollections was at age six reading a story in Reader's Digest about the Territory of Alaska and how it sparked the idea of someday traveling north to Alaska. Days after turning eleven years old, Carl packed Lois up and took her the twenty some miles into Mandan where he had rented a small room over a friend's garage and enrolled her in 5th grade in order to continue her formal education. Leaving Lois with $50 dollars and a hot plate to cook her own meals he said goodbye in early September and left her until the mid-winter Christmas break. Summers were spent working on the farm but essentially her childhood ended at age eleven and the independent personality that carried Lois through the rest of her life was established.

After high school, Lois and lifelong friend Joy Feil (Janssen) enrolled in nurses training in the Bismarck School of Nursing, and the path that would move them toward a life of service began. Mom enjoyed her years in nurses training where she made lifelong friends and honed her natural nursing skills, specializing in obstetrics. After graduation, the next few years took her west to Watford City, ND, first as general duty and then as their director of nurses; then to Quincy, WA where she helped open a new hospital as their director of nurses; followed by working four years in the intensive care unit as a nursing supervisor at Denver Children's Hospital in Colorado. In 1964, while struggling with the idea of settling down, Lois read about job openings at Mt. Edgecombe Hospital in Sitka, Alaska. She wrote to her friend Joy, who was nursing in New Mexico at the time, explaining her dilemma and inquiring if she was ready for an adventure. Joy jumped at the chance and within weeks both were hired at Mt. Edgecombe. They rendezvoused back in North Dakota to say goodbye to family and pack up Lois's Ford Falcon before heading west to Prince Rupert, BC to catch the ferry headed to Sitka. Along the way, Lois called her cousin, newlywed Neva Christensen saying the ferry trip would bring them through Petersburg and they hoped to briefly visit Neva and her new family as they passed through. By the time the two young ladies made it to Petersburg a week later, Neva had contacted the local hospital administrator, Florence LeRoy, and set up a tour of Petersburg General and an interview. Mrs. LeRoy hired both Lois and Joy on the spot. Little did they realize Petersburg would be their forever home.

In 1967, Lois caught the travel bug again and headed to Nome Alaska to work as their director of nurses. Her time in Nome was full of interesting experiences that would entertain listeners for the rest of her life. As she finished up in Nome in January of 1968, future plans included stopping in Petersburg to attend Joy and Marvin Janssen's wedding, visiting friends and continuing back to North Dakota to spend time with her folks before striking out on a new adventure. While in Nome she kept in touch with John DeBoer, a Petersburg fisherman, who was at the airport to greet Lois asking if she would like to take a tour of his newly purchased F/V Zarembo later on that day. It was during that visit John asked Lois to marry him and she said yes! On March 9th, 1968 they were married at Petersburg Lutheran Church with friends and family as witness.

The next 10 years were busy! Early in 1969 they had their First baby, a little boy who sadly lived only 3 days. Daughter, Glorianne came later that year followed by son, John Peter Jr. (JP) in 1972. In 1974, our parents sold the F/V Zarembo, purchased the F/V Ingot and our family went fishing. Salmon trolling and longlining for halibut and black cod took us from Southeast to the Fairweather Grounds, Yakutat and beyond. Her career as deck-boss, cook and first mate highlighted by raising our family onboard the boat were some of the best years of her life. Mom continued to nurse in the winter months where her obstetric training served the Petersburg community for years. Numerous families felt fortunate when the schedule allowed Lois to be at their side when delivering their babies.

Always faithful, Mom dedicated much of her time and energy to the congregational care at Petersburg Lutheran. Her church life was of utmost importance and her service knew no limits. She served on Church Council and as Congregational President numerous times. She was active in PLCW, taught Sunday School and Bible studies. She loved music and though couldn't "carry a tune" she worshiped by memorizing the words to most hymns and mouthed the words others sang. An active community member, Lois served on both the school and hospital boards and was quick to say yes if volunteers were needed in the community. She enjoyed politics and frequently wrote to leaders expressing her point of view. In retirement she hosted weekly coffee gatherings with friends and entertained friends and family as much as she could.

In later years, after a life of hard work that resulted in numerous hip surgeries, knee replacements and back injuries that left her in constant pain, she never complained, instead, turning her focus to new and meaningful ventures. In 2009, with over 50 years of nursing experience, Mom finally let her license go forcing her to retire from active duty. With John passing away the year before, she decided to purchase a condominium in Stanwood, WA to be close to JP, Kaia and more importantly Karl, Trygve and Sylvi Lois who all allowed her to be active in their daily lives. The next 10 years were wonderful as family kept her busy enjoying the role of "Beste", spending time with new friends in the Stanwood/Camano Island, WA area and returning home to Petersburg to enjoy summers with friends and Glo, Sigrid Lois and little Arne John. "I have the best of both worlds!" she would often say.

Mom's health began to severely decline in 2020, and she decided to move into Mountain View Manor and transition back to Petersburg full time. She enjoyed the undertaking and made good friends with the staff and residents there. Always looking forward, she made the decision to transition into Long Term Care in 2021 and was so happy to settle into her final home appreciating the personal attention and care the PMC staff lavished upon her.

On the evening of May 4th, 2022 Lois left this earth bound for her eternal home. We are comforted knowing our mother excitedly looked forward to the dawning of this wonderful new day as she entered the presence of the King of kings and the Lord of lords.

Memorial Service is planned for Tuesday, 17th of May, at the Petersburg Lutheran Church.

Memorials can be given to Petersburg Lutheran Church, Petersburg Medical Center Foundation or charity of your choice.