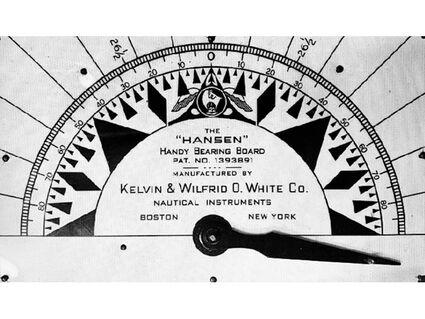 Wilfred White was originally from Australia, and studied with Lord Kelvin in Glasgow before coming to Boston in 1902. In 1919, he established the Kelvin & Wilford O. White Company. One of the nautical devices they produced was this bearing board – a type of pelorus. It measures a ship's bearing in relation to a known point. It was especially useful when used with Hansen's Handbook, written by Captain Farwell of Seattle and continuing the work of Captain Sofus Hansen, who patented the board in 1921. The instrument remains relative to any direction to which it is set, allowing for course corrections. Information and photos for this column are provided by the Clausen Memorial Museum.