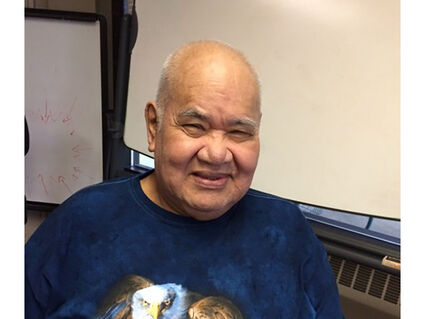 Ray Dugaqua was born January 8, 1939, in Kake, Alaska. Ray always chuckled when he explained that he was a miracle baby. There was a terrible winter snow storm. Ray was premature. Because of the storm, Dr. Benson from Petersburg was forced to be in Kake as he was traveling from Juneau to Petersburg. Dr. Benson was able to deliver Ray successfully. As Ray tells the story, Dr. Benson put him in a shoe box and put him on the door of the oven to keep him warm and alive.

Ray was raised in a traditional Lingít family. His Lingít name is Kaach Kana Sain. Ray was of the WooshkeeTan Clan from the Shark House of Kakekwaan, Eagle moiety. His first language was Lingít. When he went to school he was forced to speak English and punished if he spoke Lingít. Ray's mother moved to Sitka when Ray was in upper elementary school. He was transferring to Sheldon Jackson school when he was diagnosed with tuberculosis. Ray was put in the tuberculosis wing of Mt. Edgecumbe hospital and spent 9 months there with mostly dying patients. Ray resumed his schooling at Mt. Edgecomb High School and graduated in 1957.

Ray went to Anchorage as he said to "make his fortune". He and a friend ended up going to Bristol Bay to fish. His skipper got terribly sick and they had to stop fishing early in the season. Ray found a job with Alaska Fish and Game counting sockeyes up the Nushagak River. With a chuckle, Ray said that the float house he was staying in sank and he had to move to a tent to continue. The following year Ray got a job in Bethel with the Fish and Game. There Ray met and married a Yup'ik woman, named Florence. Ray said that he felt that he was the first Lingít man to "steal" a Yup'ik woman for a bride as Bethel seemed concerned about their "mixed" marriage. Ray took his bride to Anchorage to look for jobs. The Bureau of Indian Affairs arranged for Ray and his wife to go to college in Cleveland, Ohio. They flew there in September only to find that all the details were not completed and that they were not allowed to attend. Ray describes their situation as "up a creek without a paddle". They had no money and no way to get back to Alaska. They both got jobs at restaurants and had a miserable winter in Cleveland. In the spring they hitchhiked to Seattle and took a steamship to Southeast Alaska. Back in Anchorage, Ray got certified to be an LPN and got a job in Valdez with the psychiatric hospital. Ray and Florence started their family there. Eventually Ray got a job on the oil pipeline project and moved to Fairbanks. Ray's wife passed away and his children went down South. Ray was devastated. Ray finished his career with the oil pipeline and retired to Kake.

Ray had joined the Baha'i' Faith in Anchorage and when he arrived in Kake he contacted the Baha'i's in Petersburg. A friendship began. In 2012 Ray had a nasty fall in his apartment and had to be medivaced to Mt. Edgecumbe Hospital. The Petersburg Baha'i' community contacted Ray at the hospital and invited him to do his rehabilitation in Petersburg, and so began his ten year residency at Petersburg Long Term Care. Over the years, Ray would say that the Long Term Care staff and other residents became his second family and Petersburg became his second home. Ray walked into the forest on May 5.

Ray will be remembered for his resiliency in overcoming severe challenges with determination; a deep and sincere belief that we are all part of our human family; that his Lingít culture was a source of strength and pride; for his treasuring of native foods; for his delightful sense of humor and clever wit; for his love of family; for his infectious smile and laughter. He enriched the people around him. He left this world a better place than the world he grew up in. Ray will be missed by all who knew him.

Gunalcheesh, our friend. Until we meet again.