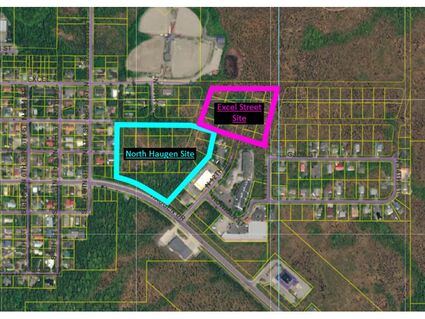 This map shows two proposed sites for a future Petersburg Medical Center facility. The North Haugen site would be along Haugen Drive behind the Petersburg Indian Association. The Excel Street site would be at the end of 12th Street beyond Mountain View Manor.

The Petersburg Medical Center is one step closer to "shovel ready status" following unanimous approval from the Petersburg Borough Assembly to begin surveying and evaluating potential sites for a future hospital.

The approved process, which will be paid for by PMC through received funding, will help the hospital learn more about the borough-owned properties and see if there is anything at the proposed sites that would prevent building.

Petersburg Medical Center CEO Phil Hofstetter said during the meeting that geotechnical work needs to be done on the properties before a final site is selected.

The hospital recently saw $8 million in funding approved as part of Sen. Lisa Murkowskis congressionally directed spending requests and is expecting another $20 million included in the state budget though the budget still needs to be signed by the governor before it becomes final.

In PMCs Master Plan, which is accessible to the public on the hospitals website, five potential sites for a new facility are listed but the hospital is narrowing its focus to two sites-North Haugen and Excel Street.

The North Haugen site is located along Haugen Drive in the area behind the Petersburg Indian Associations Hallingstad Peratrovich Building.

The Excel Street site is located at the end of 12th Street, beyond Mountain View Manor.

Plans for a new facility, funding, and other hospital and borough matters will be further discussed at a joint work session between the assembly and the hospital board on June 14.