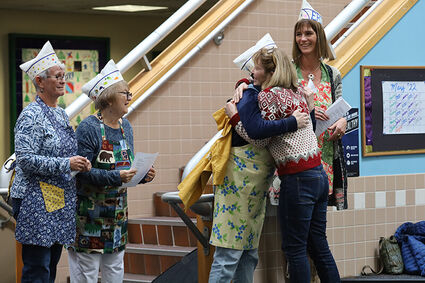 ­Wittstock makes her way down the row of Luncheonettes for big hugs after the group finishes performing their song, specially written to describe some of Bridget's favorite on-the-job memories.

School got out last week, but Bridget Wittstock still had one week to go until she ended her final year with the Petersburg School District. She is set to retire after 29 years of service and there will no doubt be a void left that will be difficult to fill.

The district recently held a surprise party to recognize Wittstock and, of course, the eventwas catered by Wittstock's mother Julie Dahl and included a song written and preformed by the Luncheonettes.

"I cried, it was very touching," Wittstock says. "It was amazing being celebrated that way. I never expected that."

And the emotions were...