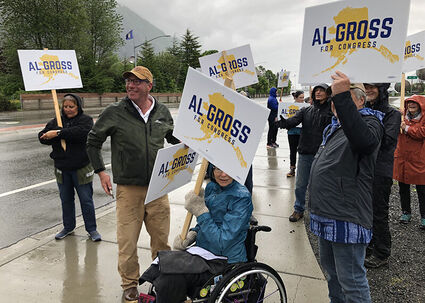 The four finalists for Alaska's special U.S. House election have been decided.

The winner of that election will fill the remaining term of former Congressman Don Young and serve in Congress until January, when the winner of the November general election is seated.

The final results are expected to be certified on or about June 25.

The margin between Peltola and the candidate in fifth place, Tara Sweeney, increased as more ballots were counted on Wednesday.

"I feel very confident that the top four is set. I think that for another candidate to knock out someone else would be difficult to do, statistically speaking," Begich said.

Palin was more cautious about the final result, saying, "like everything else, I'll believe it when I see it."

Palin attributed her place at the top of the results to a variety of factors, including her "love and passion for Alaska" and Alaskans' frustration with the federal government.

"We have to focus on policies that are going to make life better for the regular Joe Sixpack out there, those of us who are having a tough time, figuring out why government is in our way, it's on our back, it's not on our side," she said.

Though she has been out of elected office for more than a decade, Palin said she believes Alaskans remember her record as a governor and a mayor, despite opponents' efforts to portray her as an out-of-touch celebrity.

"People who know me respect my record, and I think that plays a part in the vote also, because people, they want you to know that you do have some chops when it comes to politics and how to fight for what's right, and how to be courageous in the face of constant criticism, to grow thick skin. People who know me know that's who I am, and I'm ready, willing and able to go serve," Palin said, adding thanks for her supporters.

Though he finished second to Palin, Begich said the results give him more confidence as the special general-election campaign begins.

"Based on the data that we've seen, a large portion of the votes that did not go to a top-four candidate will come over to our column," he said. "And so we expect things on the ground in the final four setting to really tighten up and, actually, for us to have a slight advantage going into the general election."

More than 70% of participating voters did not choose Palin, Begich said.

"I think that sends a clear message that Alaskans are ready for some new energy, a fresh perspective," he said.

Al Gross ran his successful campaign with a network of supporters from his unsuccessful run for the U.S. Senate two years ago.

In that race, Gross won the Democratic primary as an independent and received extensive support from Democrats inside and outside the state. With a Democrat in this new race, does Gross have a political lane?

"You bet he does," Keith said. "It's a hell of a lane. It's a lane that any American politician would want to run in. And it's one that's called 'the parties are awful.'"

"It did take us a few weeks to get her campaign set up, and in that time, I think votes went to other candidates that will go to her in August. So I feel really good about it," Jones said.

Peltola isn't a millionaire, Jones said, something that distinguishes her from the other three finalists.

Jones noted that all four finalists will now simultaneously run in the ranked-choice special election and the ordinary primary election for U.S. House.

Thirty-one candidates, including 20 who failed to make the top four in the special election, are running in the regular primary.