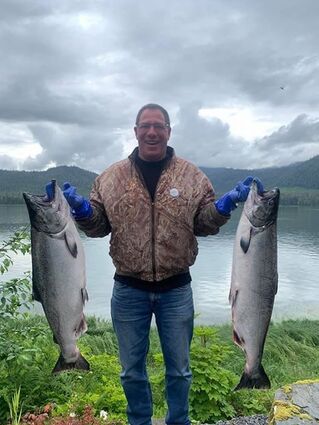 Republican candidate Tara Sweeney cannot replace independent candidate Al Gross in Alaska's special election for U.S. House, the director of the Alaska Division of Elections said Tuesday, one day after Gross said he will withdraw from the race.

Sweeney's campaign will not file a suit, but a third party could do so.

"Our campaign will continue to wait for the election to be certified, but we do not intend to contest the Division of Elections' current opinion," said Karina Waller, campaign manager for the Sweeney campaign.

"We believe they will ultimately come to the right decision on this matter," she said in a prepared statement.

Gail Fenumiai, director of the Division of Elections, said ballots for the general election must be finalized by June 28, meaning any lawsuit should be filed "immediately."

When Congressman Don Young died in March, his death triggered a pair of special elections intended to pick someone to finish the remainder of his final term in office.

Under Ballot Measure 2, the election-reform initiative approved by voters in 2020, the top four vote-getters in each primary election advance to a general election where a winner is chosen by ranked-choice voting.

The special primary election took place June 11, and because it was called on short notice, elections officials held it entirely by mail, a first for the state.

The primary results won't be certified until Saturday, but Gross had been on pace to finish third before he abruptly said he would withdraw and not continue to the general election.

All three, plus Sweeney, are candidates for the regular August primary and November general election that will decide a two-year seat in the House.

Sweeney is on pace to finish fifth, and under a normal election would replace a candidate who withdraws, as Gross did. But state law contains a caveat to that: The replacement takes place only if it is "64 days or more before the general election."

Monday was 57 days before the Aug. 16 special primary election, and Fenumiai cited the timeline as a reason to not replace Gross with Sweeney.

Outside observers have noted that the law setting that timeline refers to a normal election, and that this is a special election operated under a different timeline proclaimed by the governor.

Gross has not responded to interview requests.

"Trust that I am making the right decision," he said in a Tuesday morning email to supporters.

"Unfortunately, Alaska and America are stuck right now, and (my wife) and I have decided it is just too hard to run as a nonpartisan candidate in this race," Gross's email said.

The message, sent before the Division of Elections announcement, encouraged supporters to vote for either Peltola or Sweeney.

Ulmer and Lois Epstein, both co-chairs of Gross's re-election campaign, said they don't know why he withdrew from the race, but both women said they intend to support Peltola.

In the 2020 race for U.S. Senate, Gross ran as an independent but received financial and voting support from Democrats who preferred him over incumbent Republican Sen. Dan Sullivan.

In this election, the Alaska Democratic Party opposed Gross for U.S. House after he said he would be open to caucusing with Republicans in the House if elected.