Right to abortion in Alaska remains protected, but advocates say it's fragile 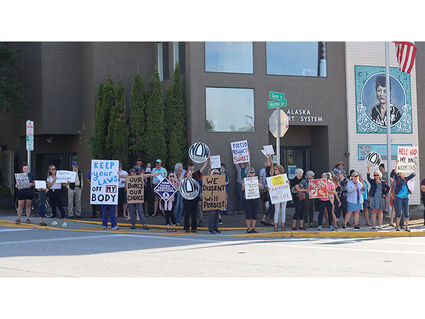 Around 80 demonstrators gathered at the Petersburg Court House on the evening of Friday, June 24th, 2022 cheering as passing cars honked and holding signs–some that read "abortion is healthcare," "we will not go back," "keep your laws off my body," and "ERA Now" a demand for ratification of the Equal Rights Amendment. The rally proceeded to march through downtown Petersburg chanting "My body, my choice."

The U.S. Supreme Court overturned Roe v. Wade today, ending the federal right to abortion and putting access to it in the hands of states. In Alaska, abortion remains legal through the state constitution's provision on privacy, but abortion-rights advocates say that right is fragile. And they say that access to abortions in Alaska is already inequitable.

"The big takeaway is abortion is still safe and legal in Alaska. All of the options that existed yesterday exist today in Alaska," said Rose O'Hara-Jolley, Alaska state director of Planned Parenthood Alliance Advocates – Alaska.

"It doesn't mean that we're always guaranteed that right. Although nothing will change and patients can still come to us to ask to access abortion care, we will have to stay vigilant to make sure that it stays that way," they added.

While abortion remains a legal right, advocates said it's not an equitable right. Due to systemic racism and other factors, O'Hara-Jolley said people in Alaska don't have equal access to abortion.

"Legal access has never been enough. We need to be fighting to expand access to reproductive health care and abortion in Alaska."

Alaska has three Planned Parenthood clinics in Anchorage, Fairbanks and Juneau; a fourth in Soldotna closed at the end of May. The clinics will continue to provide a full range of reproductive health care services.

"Given the geography of our state, it is extremely hard for people off the road system to not only access abortion care but to access all types of health care, and especially reproductive health care. And so, unfortunately, we live in a reality where people will have to get on an airplane or drive hundreds of miles in order to receive that care," O'Hara-Jolley said.

"So although it is great that we have a constitutional protection, we really should be thinking about – how do we make sure people have true access to the health care they need?"

Alaska is served by Planned Parenthood Great Northwest, Hawaii, Alaska, Indiana, and Kentucky – which also includes Washington and Idaho. Due to the Supreme Court ruling, Kentucky now prohibits most abortion, Indiana's legislature is scheduled to meet in a special session next month and is poised to limit abortion access, and Idaho residents are likely to lose access in August.

Caitlin Shortell, a civil rights lawyer in Anchorage, said it's not time "to just kick back and relax."

"Because just a few months away, there's an effort to change the constitution and allow a ban. So, we can't let that happen," she said.

Wasilla Republican Rep. Chris Kurka, who's running for governor, said he plans to call Gov. Mike Dunleavy to propose having a special session on the road system to pass legislation he sponsored criminalizing abortion.

"To put our differences aside and let's get this done; let's protect the pre-born," he said on the phone Friday.

Making abortion illegal in the state is Kurka's number one issue. He's the former executive director and vice president of Alaska Right to Life. While he's "happy" and "excited" about the Supreme Court decision, he said it wasn't necessary to wait to change the law in Alaska and it should've been changed long ago.

"But here's what I believe this decision really does for us: it removes the pretense from politicians who've been saying they're pro-life but then refusing to act. So now there's no longer the pretense. Excuses are gone."

With Roe v. Wade overturned, Gara said the right to an abortion is now a state issue. If elected governor, he said he would screen judicial nominees to ensure that right is protected.

"The most important thing to protect choice in Alaska is to appoint justices who will uphold our pro-choice precedent," he said on the phone Friday. "We will have two Supreme Court justices in Alaska retire in the next three years."

Gara also said he would veto any anti-abortion-rights legislation that comes to him and ensure contraception is available to prevent unintended pregnancies.

"I believe that we have to make abortion safe, legal, but rare, if you can, right? And so contraception matters. But I will make sure that Alaska remains a pro-choice state."

In a press release, independent gubernatorial candidate Bill Walker said he and running mate Heidi Drygas would not change the status quo and "women will continue to make their own choices regarding their reproductive healthcare."

Though Walker's campaign said Walker is "pro-life" and Drygas is "pro-choice," the release says they "are aligned in our goal of protecting women and families in Alaska."

During Walker's time as governor, his administration defended a state law that attempted to limit the number of abortions funded by Medicaid and appealed the issue to the state supreme court. A ruling, released after Walker left office, found the law unconstitutional.

Republican and abortion opponent Gov. Mike Dunleavy, who's running for reelection, issued a press release Friday saying the "future of abortion in Alaska" should be decided by "the people of Alaska, not a handful of elected officials or appointed judges."

"I will therefore be introducing a resolution for a proposed constitutional amendment to the legislature in the next session to answer the question whether abortion shall, or not be a constitutionally protected right," the statement said. Dunleavy would only be able to carry out this intent if he's still governor when the legislative session begins in mid-January, unless there's a special session before then.

A spokesperson for Republican gubernatorial candidate Charlie Pierce said Pierce "fully supports the decision of the Supreme Court on Roe v. Wade" and is "pleased to see that it is now a matter for the states to decide."

Noting that "Alaska is already not affected by the Supreme Court issue as we stand today," the spokesperson said Pierce "fully supports adoption, counseling, adding support for the expectant mother and adoptive parents, and he's going to promote that. He has not denied that he's a pro-life candidate but he also will follow the law."

The long-term consequences for other rights

Anchorage civil rights lawyer Shortell said the overturning of Roe could be a signal of other rights going away.

"We do reasonably fear that Obergefell, the case securing the fundamental right to marriage for same sex couples, would be overturned and I mean, if you follow the court, it's like an everyday nightmare," she said.

Shortell said rights are "only as good as the officials who are responsible for enforcing these laws. So that's why it's so important for us to make sure we elect the right people and demand that they respect our rights."

Planned Parenthood's O'Hara-Jolley said the organization will continue to partner with other groups to keep abortion safe and legal in Alaska and to expand access to reproductive healthcare.

"We aren't going anywhere. We will not stop providing care – not only abortion care, but reproductive health care – and fighting to make sure that we can continue to expand that access, even though it has just been greatly reduced across the country. People have been in this fight for generations and we are going to continue this fight."