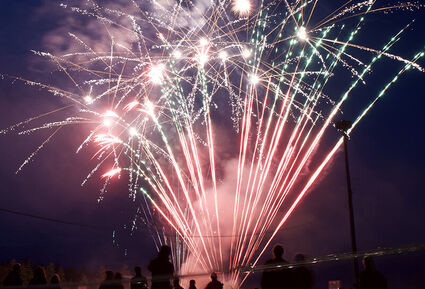 Volunteers, many from the Petersburg Volunteer Fire Department, spent the week leading up to the Fourth of July preparing the annual fireworks show. They gathered at the ballfields Sunday evening to set up the shells, mortars, and a new wireless firing system. The system is being used this year partially thanks to $1,000 in prize money awarded to Dave Berg by the Petersburg Community Foundation after he was named Petersburg Community Volunteer of the Year. Prior to the show, Berg linked up a Cobra 18R2 remote control to Cobra 19M firing modules which would set off the firework fuses after r...