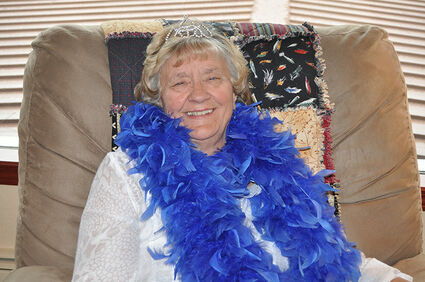 Beverly Jean Olin Hammer was born in Kalispell, Montana to Arthur and Madeline Olin. She joined her older brother Wilbur. As the oldest daughter, Bev took her role very seriously as she helped with her three younger sisters Alice, Shirley and Twila. Bev always reminisced about her younger years growing up in Montana and Wyoming. She said, "Dad was a company man, we went where the company sent us." Bev was a coal miner's daughter before it was made popular in a song. She said that they didn't wear shoes and when they did the shoes were often either too small or too big.

In the early 40's, Grandpa Art had located his father and an uncle residing in Ketchikan; so, the Olin Family set off on an Alaskan adventure. They were only in Ketchikan a short while when a job took the family to Meyer's Chuck. Bev recalled eating sugar cookies brought to them by the mail boat, she said it was years before she realized that sugar cookies were not supposed to taste like diesel!

Beverly graduated from Ketchikan High School in May of 1949. She had met Jim Hammer of Petersburg earlier in the fall and they were excited to get married. Grandpa Art had other ideas, he didn't want to give his beloved eldest daughter away, so he made them wait until after she turned 18. With her father crying as he gave her hand in marriage, Jim and Bev said their vows in a lovely service in the First Lutheran Church of Ketchikan on November 26, 1949.

The newlyweds headed to Seattle where Jim was attending business courses. Bev loved to share with us that she had to write Jim's excused absence for a weekend getaway to San Francisco with fellow newlyweds Ben and Ruth Noride.

By early summer the young couple found themselves in Petersburg, where they made their forever home. Bev and Jim were blessed with five children, Kenneth, Christi, Bob, Wendy and Roger. They were also blessed with raising their nephew, Jon Stephen. Over the years, their home was a haven for nieces, nephews and young friends of their children. If they were willing to work in the cannery, fish or work other odd jobs, the Hammer Home was there for them.

Bev's kitchen was always full of activity. If she wasn't baking or cooking, one of the kids was! She made sure that she shared favorite family recipes with whoever was interested in learning.

Bev took an occasional odd job during the summer fishing season, but she was a "family first" mom, staying home to raise the children, keep the home fires burning and the neighborhood coffee group active. When the youngest child was finally in school full time, Bev went to work as a teacher's aide. She worked closely with Claire Strand, Margaret Smith and DJ Roundtree. After a few years, she moved to the City Finance Department. On weekends, she and Jim would go out hand trolling on the Little Beaver (built by Arne Espeseth). Beverly also worked in the LIO Office with Dorothy Pentilla. Bev always managed to find exciting jobs; Willie Herff called her to come work for him at the Tyee Hydro Project as his night baker. It was an adventure that she couldn't pass up. She regaled us with many stories about "Life in Camp." During this time, Jim went from hand trolling to power troll and wanted his deckhand and first mate to join him. He purchased a bigger boat and renamed her the Beaver I. So off they went, often taking younger family members with them.

Beverly had many interests in her 90 years, from bowling teams and sewing club to teaching Sunday school. She was very active in the Lutheran Church Women's Group, weekly Bible studies, Pioneers of Alaska Igloo #10, and the Sons of Norway.

Beverly had a zest for life. Two of her favorite sayings were, "Bloom where you are planted" and "It's the quality of your time together, not the quantity." She loved family gatherings, and for years it was her home that was the place to gather. She loved picnics! Beach picnics with fellow fisher-friends, out the road picnics that lasted 8-9 hours, Pioneers of Alaska picnics – if it was a beautiful day Bev was often the one calling to get something going.

Bev liked to direct traffic and take care of everyone around her. She made sure everyone had a ride to church, a ride to coffee, she was great at extracting help with the simplest of explanations..."because it is right." If Beverly called you, you just did it.

After Jim's death in 2005, Bev was a ship afloat. She renewed a friendship with Don Nelson after a couple of years. The two of them found that they had many interests, like they both loved to picnic, dance, travel, and explore the world around them. The two were almost inseparable! Bev and Don were two of the lucky ones who were able to form a special bond over the years. Don will forever be known as Don the Great!

Beverly left us quietly on June 25, 2022. She was surrounded by love. She left her family with a lot of advice, words of wisdom, and a place in our hearts that will never be quite full.

In lieu of flowers: Please make donations to the Petersburg Lutheran Church / Capital Projects, the Home Health dept. of PMC or the Petersburg volunteer ambulance team.