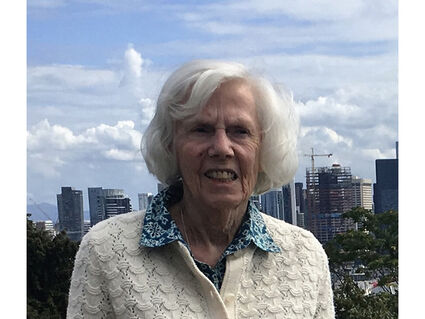 Mildred (Harvey) Fuglvog was a loving wife, mother, grandmother, sister and friend. She passed away at Evergreen Hospice in Kirkland, Washington on January 25, 2022.

Mildred was born May 28, 1932 in Marysville, Washington to Frank H. and Violet (McFadden) Harvey. After graduating high school, she attended the University of Washington where she earned a Bachelor of Science in Medical Technology.

While working at Puget Sound Blood Bank, she met her future husband Edwin Fuglvog, who was attending Western Washington Teacher's college. They married in 1956 and moved to Petersburg in 1959. Almost as soon as Ed finished building their new home on Wrangell Avenue, they welcomed daughter Karen Marie in 1961, shortly followed by Arne in 1963.

Mildred spent 50 years in Petersburg and though she grew up in Washington State, she considered Petersburg her home. She worked in the lab at the hospital and was active in the community with the Sons of Norway and the Lutheran Church. She so enjoyed living in Petersburg, especially spending time with friends and family doing the activities she loved: picking berries, gardening, boating, going to the cabin in Duncan Canal, being a grandma, and enjoying her home on the Wrangell Narrows with Ed.

Mildred was gracious, kind, and generous. Her friends and loved ones miss her dearly.