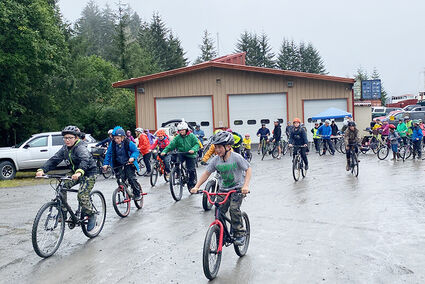 Pedalers hit the road at the start of the PMC Foundation's Pedal Battle Saturday morning.

Bikers and paddlers gathered at Scow Bay Saturday morning to participate in the annual Paddle and Pedal Battle fundraiser, which raised about $15,000 according to Community Wellness Coordinator Julie Walker.

"I think our goal this year was to revive the event and it really felt like we did that," Walker said.

About 70 participants made it out to the event with the majority participating in the Pedal Battle.

Because of the poor weather and sea conditions, some who planned on kayaking or paddle boarding chose to bike instead.

The Paddle Battle course was also shortened because of the weather to end at South Harbor, making it about three miles long rather than six miles out to Sandy Beach.

During the races, Kim Toland, Amy Anderson, and the U.S. Coast Guard served as the safety boats while Pat Blair of Wheelhouse Bikes checked bike tires and made repairs. 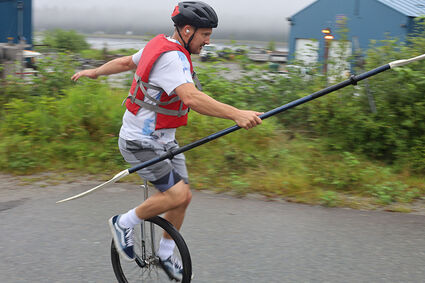 Matt Pawuk incorporates pedaling and paddling during the Pedal Battle, intending to use the kayak paddle to keep steady on his unicycle for the long ride.

Walker reported that they heard a lot of positive feedback about the Pedal Battle and said they plan to include it again next year.

The approximately $15,000 raised this year was also 10 times more than their fundraising goal at last year's event.

"We were really happy with that number," Walker said. "We have not seen that before so that was really exciting."

She reported that the majority of the funds were raised by participants getting sponsorships from friends and family, but some came from corporate donations including Rocky's Marine, Rexall Drug, PMC Hospital Guild, Anchor Properties, Petersburg Properties, Viking Travel, Airlift Northwest, Hammer and Wikan, and Trading Union.