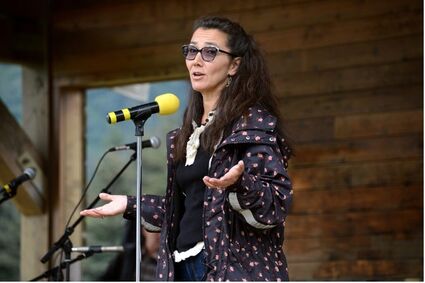 Mary Peltola, Democratic candidate for U.S. House, speaks at an event in Juneau on Saturday, Aug. 13, 2022.

As of Wednesday afternoon, with 395 of 402 precincts reporting, Peltola had earned 38.03% of first-choice vote in a race that will determine who fills Alaska's lone U.S. House seat until January, completing the term left unfinished by the death of Congressman Don Young earlier this year.

Many ballots remain to be counted, and some can arrive as late as Aug. 31 and still be added to the total.

Under Alaska's new ranked choice election system, the candidate in third place on Aug. 31, the last date for ballots to arrive from overseas, will be eliminated.

Voters were given a chance to select a second choice, and anyone who had the eliminated candidate as their first choice will have their votes go to their second choice instead.

The winner is the candidate with the most votes after that process.

Before the initial results were announced, Peltola said she felt good.

"We've reached out to 80,000 Alaskans over the last few days - Republicans, nonpartisan, Democrat - and we're getting very positive feedback about the positive campaign that we've run and staying on message and keeping it on what Alaskans want and Alaskans' needs," she said Tuesday night.

But if Begich stays in third, political commentators have said they expect many of his voters may have Palin, a fellow Republican, as their second choice. If that's the case - which won't be known until the 31st - Palin will win.

The alternatives are leaving their second choice blank, picking a write-in or picking Peltola herself. If enough Begich voters have picked those alternatives, Peltola will win.

During her campaign for House, Palin denounced the ranked choice voting system, which was installed by voters in a 2020 ballot measure. Now, she's likely to be its first beneficiary.

Pam Purvis, voting at Rogers Park Elementary School in Anchorage, said she picked Mary Peltola first and wants to see her in Congress as soon as possible.

"For four months, let's make history," she said, referring to the fact that, if elected, Peltola would be the first Alaska Native member of Congress.

She said Palin was her least favorite of the candidates, behind Tara Sweeney, a Republican who missed the cutoff for Tuesday's special general election.

Brooke Cusack, who held signs for both Palin and U.S. Senate candidate Kelly Tshibaka at an Anchorage street corner, said, "I've always trusted Sarah and I think that she would lead us a great way in Congress. It's a choice I didn't see coming, but I fully support it. I also support Nick as well," she said.

She does not like ranked choice voting and declined to say if she used that option.

Peltola said she's hopeful that many conservative and Republican voters will have ranked her second.

"I've been asking people directly – like I was at the Fairbanks Golden Days parade and when I'd see somebody with a sign either Sarah or Nick, I'd ask them, 'Hey, would you consider me as your second-choice vote?'" she said. "And it was very favorable, the reactions that I got: a lot of laughter, a lot of thumbs up, a lot of positivity."

Turnout was the highest for a primary election since at least 2014. With 80% of precincts reporting and thousands of absentee ballots still outstanding, turnout was at 26% of registered voters. (Turnout in 2014, boosted by a referendum on an oil tax proposal, hit 39%).

Yereth Rosen and Andrew Kitchenman contributed to this story.