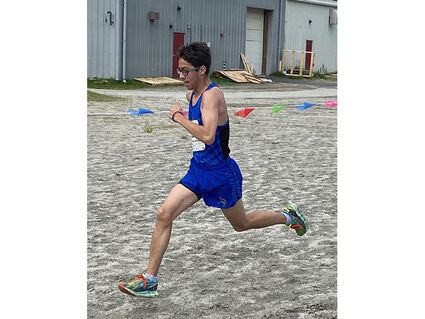 Daniel Asprey glides along the course of the Sayeik Invitational in Juneau.

The Petersburg High School cross country team got its first taste of competition at the Sayeik Invitational last Saturday in Juneau.

Five Petersburg runners made the trip up on the plane and down on the ferry to compete against students from Juneau-Douglas, Thunder Mountain, and Haines as they prepare for the season.

"I was really happy with how all the individual performances were," said Coach Tom Thompson.

Vikings newcomer Daniel Asprey placed third in the race with a time of 18:03.

The junior moved to Petersburg from Craig this year which Thompson called a nice surprise as the team looks...