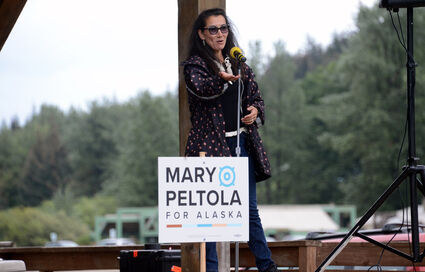 Mary Peltola, Democratic candidate for U.S. House, speaks at an event in Juneau on Saturday, Aug. 13, 2022.

Democrat Mary Peltola will become Alaska’s first congresswoman and the first Alaska Native in the U.S. House of Representatives.

A special primary election in June narrowed a field of 48 candidates to four, and the withdrawal of nonpartisan candidate Al Gross narrowed the options to a final three.

Alaskans picked their preferences on Aug. 16 in the state’s first ranked-choice election using a system installed by a voter-approved ballot measure.

Palin could have won on Wednesday if two-thirds of Begich voters picked her as their second choice, but in Wednesday’s preliminary tally, just over half did. The remainder backed Peltola, a write-in candidate or no one at all.

Wednesday’s tally gave Peltola 91,206 votes and Palin 85,987. Another 14,965 votes were either blank, failed to list one of the two as an option, or were cast incorrectly.

The result isn’t final, but Alaska Division of Elections Director Gail Fenumiai said she believes there are fewer than 1,000 ballots of all kinds left to be counted.

The AlaskaBeacon.com is a donor-funded independent news