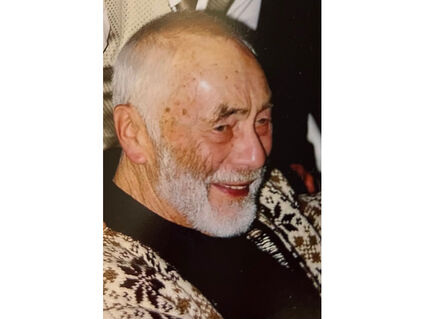 Raymond Leon Olsen, Senior was born on January 25, 1926 to Oscar and Olga (Kvende) Olsen in Stanwood, Washington. He was their only child.

As a young man he joined the Navy, holding the position of machinist's mate until 1946 on the USS South Dakota, one of the most decorated ships in World War II.

After the military he wed Gladys Olsen (Jensen). They were the proud parents of five boys, John, Jim, Ray Junior, Bob, and Mike. They lived in Arlington, Washington, where they had a farm and raised black angus cattle.

In the 1970s the family of seven made their way North to Alaska to take part in the booming logging industry. They settled in Petersburg, and from there Olsen & Son's Logging was born. The logging operation morphed into earthwork and lumber milling. There were many roads pioneered and areas logged by Ray and his crew over the next 30-plus years.

Ray will forever be remembered for his dedication and work ethic. There are stories all over this community about the rough and tough "Mad Dog"...and his big heart. Stories of Ray agreeing to building projects and carrying the note so that a young man, just starting out in life, could build his first home. He once hired the boy down the street to shovel snow from his driveway so that he could save up for a new bicycle, and paid the young boy's father extra money on the side to help the fund.

There were many community projects that Ray was involved in, including the ball field, the Rebi Hus, and the Holy Cross House, to name a few.

During his later years in life, he could be found in the early morning hours of every single day walking the hill up to the pit. At one point he had a pet grouse up there. He would reach his hand down towards the ground and the grouse would perch on his arm.

Ray passed away peacefully on Friday, August 19, 2022 at Petersburg's Long Term Care. We will forever be grateful for the love and compassion that Long Term Care showed both Gladys and Ray during their time there.

A memorial service will be held for both Gladys and Ray at the Sons of Norway Hall on Saturday, September 10, at 1 pm.