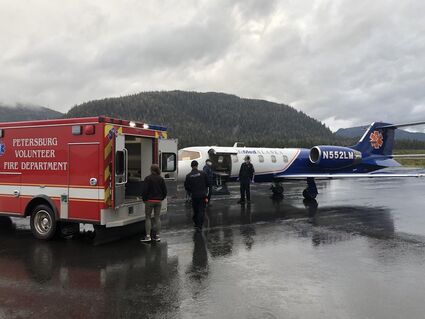 Local ems volunteers transport a patient to the airport for a Medivac flight Specially equipped planes are called in to transport patients both out and in to Petersburg for care.

Tom Laurent's EMS career began in the mid-70s when he was 16 and joined the Juneau Ski Patrol. He came from a ski-bum family and fit right in at the Eaglecrest Ski Area where his job was to take "people that injured themselves off the hill."

Since then, he has spent a total of 46 years involved with EMS and 32 of those were dedicated to volunteering in Petersburg. Unfortunately, during that span volunteerism itself has been falling off, not just locally, but across the entire United States and he cannot understand why, Laurent says.