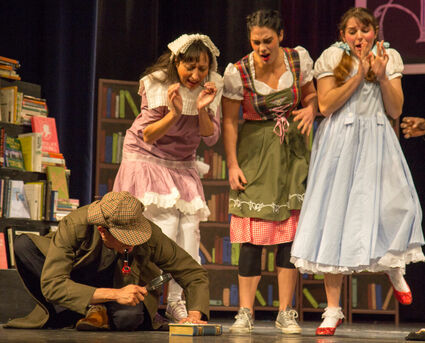 In a scene from "The Enchanted Bookshop" performed on Nov. 21 and 22, 2019, which was the last time prior to the pandemic that the community theater group was able to perform, Sherlock Holmes (Alex Aguilar) inspects a suspicious book. Pictured from left to right are Aguilar, Elisa Teodori, Kaitlin DuRoss and Abbie Hardie.

The Mitkof Mummers will be holding a casting call on Tuesday as they mount a return to the stage after over two years without a show.

In most years the Mummers would hold a fall show and a spring show during Mayfest, but they have been unable to do so since the start of the COVID-19 pandemic.

Though there were some ideas of what could be done during the pandemic including radio plays, it was just too hard to put together, said Irene Littleton, the Mummer's director.

But now that they are able to gather together in the Wright Auditorium she said, "We're ready, everybody is chomping at the bi...