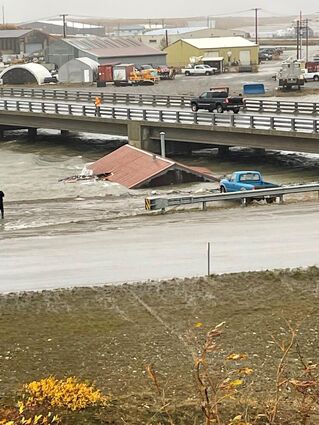 A home that was knocked off its foundation and floated down Snake River during a severe storm in Nome, Alaska, is caught under a bridge Saturday, Sept. 17, 2022. Much of Alaska's western coast was battered by the storm, which was the remnant of Typhoon Merbok, causing the most damage of any storm in the last half century.

ANCHORAGE, Alaska (AP) - Authorities in Alaska were making contact Monday with some of the most remote villages in the United States to determine their food and water needs, as well as assess the damage after a massive storm flooded communities on the state's vast western coast this weekend.

No one was reported injured or killed during the massive storm - the remnants of Typhoon Merbok - as it traveled north through the Bering Strait over the weekend. However, damage to homes, roads and other infrastructure is only starting to be revealed as floodwaters recede.