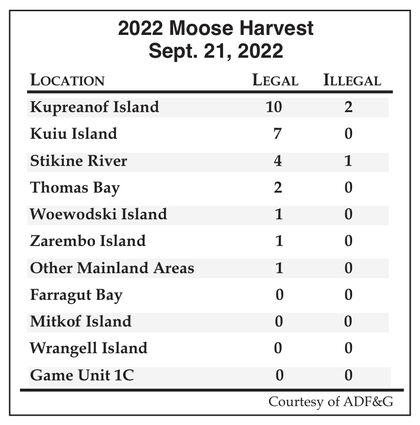 If you have been putting off making room in your freezer, now may be the time to do so.

The RM038 moose hunting season opened last Thursday and will last until Oct. 15.

The hunt encompasses Units 1B, 3, and a portion of 1C located south of Point Hobart.

Areas include Kuiu, Kupreanof, Mitkof, and Wrangell Islands, the Stikine River, and Farragut Bay among others.

According to the Alaska Department of Fish and Game, a legal moose is defined as a bull moose with a spike or forked antler, or a 50-inch or greater antler spread, or three or more brow tines on either antler, or two brow tines on b...