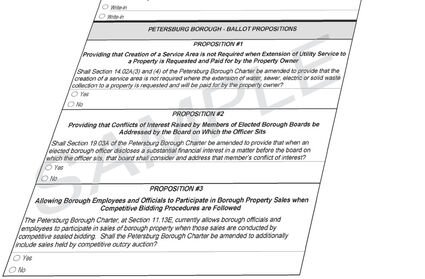 Voters will be faced with three ballot propositions during the municipal election on Oct. 4 which, if approved, would amend Petersburg's home rule charter.

The three ordinances which sent the three propositions to the ballot were unanimously passed by the Petersburg Borough Assembly earlier this year.

Proposition 1 would codify the borough's ability to allow the extension of utility services to properties outside of...