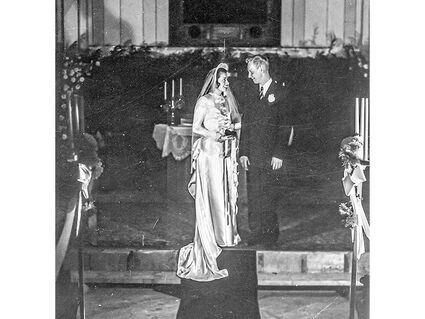 Last Sunday there was a familiar Petersburg scene at the Lutheran Church's Holy Cross House: a table laden with open-faced sandwiches, shrimp and macaroni salad, delicate krumkake, spritz, and the signature kransekake (wreath cake). This time, however, the celebration was for an uncommon, maybe even unprecedented event: a 75th wedding anniversaryâ€“a milestone so few couples accomplish that there is no statistic for it, according to the U.S. Census Bureau. The room was packed and loud with happy reunions and exclamations over a display of old black and white photos of the guests of honor: Colleen and Wally Swanson.

Colleen and Wally can't say for sure when they first met. She remembers him as a little kid in the Lutheran Youth Choir, when he must have been six or seven. Wally remembers Colleen as one of the high school girls who went to work at the telephone company as a switchboard operator after school, from 4 to 10 p.m., and as the Song Queen (the lead cheerleader) when he was a basketball player.

Back then their two year age difference meant that, while they were aware of one another and their parents were friends, they didn't really know each other. It was the summer after Colleen's freshman year in college, when her parents invited the Swansons for dinner and a card night, that they were thrown together and decided to go for a walk.

"We walked around and went on up to the CAA hill, where the ball parks are now. It was a wood plank road then. I'll bet not many people remember when it was the CAA hill. And that was the beginning," Wally says.

Colleen nods her head yes, "It wasn't an official date, but that was the beginning." When asked what it was that caught his interest, besides the fact that Colleen McDonald was gorgeous, before he could answer she quipped, "Well, I had a boat!"

When they decided to marry, Wally was 19 and Colleen was 21. "He had to get his parents permission," Colleen laughs.

He responds, "She loves to mention that. She's been doing it for seventy-five years."

She laughs, "Talk about robbing the cradle!"

Roxy Lee remembers their wedding. It was the first event she attended after arriving in Petersburg in 1947, at the age of eighteen. Her aunt explained that all church gatherings were being held in the basement because upstairs, though the roof was on and the stained glass windows had been installed, the interior of what would become the sanctuary was unfinished and crowded with supplies. So it was a big surprise to arrive and find that a group of friends and family had worked together to stack all the lumber in the sanctuary at the back of the altar and hide it behind a row of small spruce trees. They'd carried the cumbersome rows of connected theater chairs upstairs and the Pastor's wife, Helga Knutson, unpacked the new cross and candelabras and allowed them to roll out the new red carpet runner. They placed great bouquets of flowers along the aisle so that the Swansons will forever be the first couple to be married in the new Lutheran Church sanctuary.

The newlyweds moved into the apartment next door to Wally's parents, above what was then the telephone company and the library and is now the Petersburg Pilot.

It wasn't easy. For their first few years he'd work the canning line at the cannery and then take whatever jobs he could find through the winter.

They had four children in five years.

They bought a lot on Wrangell Avenue and their fathers helped them put in a concrete basement and frame up the house.

Wally remembers, "I was working twelve hour shifts from May first through October. Every weekend I thought I'd have off, we'd have to make ice. Colleen's father made her a jig and-while I was working and the children were asleep-she used it and a drill press to make pilot holes in the many short lengths of oak flooring we put down in the living room and bedrooms. She insulated the walls, and she wallpapered them."

"She made our house beautiful. She has always had a very elegant fashion sense," says their daughter Carol McCabe. Her daughter-in-law Miriam Swanson adds, "She was not afraid of getting dirty and loves to work in her garden, but whenever she went out she was dressed to the nines."

When they moved their young family to Wrangell Avenue it was lined with houses owned by young couples building families. Sue Paulsen remembers when her folks moved there, "It was paradise! All these young families with lots of children running around." So many kids that they called it "Rabbit Row."

Wally got a permanent job at Kayler-Dahl Fish Co. in 1951 but was still working long hours.

Colleen would feed the children, pack a dinner for Wally, load all the kids into the car and drive out the long narrow pier to deliver him a warm meal. "And, when she made dinner, it was meat, vegetables, potatoes, maybe a roll, just a complete meal every night," says her daughter Carol.

In 1957, Wally was offered a job in Hayward, California at the Continental Can Company servicing their canning machinery at various canneries. The regular hours and opportunities for the kids were tempting enough that they packed most of their belongings into the attic, rented the house, and bought a Ford station wagon to haul their trailer full of necessities. They didn't have much, and the house in Hayward was so small that Wally made a bench out of plywood with a cushion on it that he attached to one wall, "and that was our davenport."

Their youngest son John remembers, "The playgrounds were concrete and surrounded by chain link fencing. It was a shock to kids used to running free in the rainforest. It felt like we were in prison."

Carol remembers that when it rained all the California moms would call their kids inside, but the Swanson kids ran outside and gloried in it.

Wally remembers that the job was not as described and, after six months, the family was ready to go home. "It was the best thing we ever did, coming home. In the fall of '65 I got the job at PFI because the summer foreman didn't want to stay in Alaska. I was the lucky one and stayed there for twenty-five years." He went on to become the plant manager, and later the fleet manager.

When John started first grade, Colleen became the first secretary/bookkeeper at Petersburg's elementary school and stayed there for twenty years.

Carol recalls, "Our mom is an incredibly hard worker. She would make us all breakfast before we all went off to school, then we'd all go home for lunch, and she made us a good lunch! She'd go back to work; we'd go back to school and every night she made a family dinner and delivered one to Dad if he wasn't able to be home." She was also very active in the Lutheran Church as the director of the Junior and Senior Choirs, on the Library board, a Cub Scout den mother, and Girl Scout leader.

Wally's dad told him they should buy a large lot on Nordic Drive that was up for sale, and they did. He 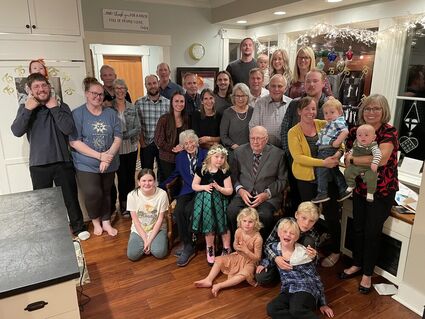 for Colleen's mother to live

The house that came with the lot was in rough shape, so Wally, a volunteer fireman, arranged a training session and had it burned to the ground. There they built their third and final home, a light and airy place with stunning views of the Wrangell Narrows and the Coast Range.

Neither Wally nor Colleen feel they have any big secrets for marital success. Colleen says, "Just like anyone, we had tough days and days that were just so sweet."

Their oldest son Rob believes that anyone could learn from their marriage, "They both always put family first. They stuck with it."

And that boat that Colleen had back when they were courting? Rob says, "It was a beautiful rowing boat that her dad, my Grandpa Mac built for her. He was a boat builder. My dad had a mold of it made and then had eight fiberglass reproductions built, so we all have one, all the kids and some of the grandkids."