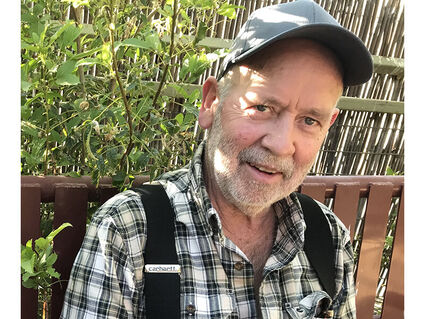 Sandy was raised in Petersburg, attended Petersburg Elementary School and graduated from Petersburg High School in 1966. During his childhood years, he spent summers all over Southeast Alaska at his family's logging camps. He learned to build almost anything from parts and pieces that he could scrounge up. He was interested in anything he could put a motor on. That kind of life was a boy's dream! With his brothers, sisters, and cousins at camp, there were always lots of kids around and endless things to do. As soon as he was old enough, he started working in the woods with his dad and his brothers. After high school, he headed to Santa Barbara with some of his buddies, and went to flight school, ultimately getting his pilot's license. During his escapades with his friends in the Lower 48, he had many memorable experiences, and told hilarious stories throughout the years.

As a young adult, Sandy continued to work with his dad and his brothers at Reid Timber, eventually taking on more responsibility for ongoing operations. He was married and had his first son, Andy. Years later, he married his second wife, Tracey Thynes, and had two sons, Bosjun and Tyler.

In 1988 when his folks retired, Reid Timber became Reid Brothers Logging & Construction, and he continued logging with his brothers until the mid 90's, when logging became a thing of the past.

At that time, he and his siblings decided to move the company back home to Petersburg. Work transitioned from logging to local rock work and construction projects, where work continues with his sons, Bosjun and Tyler, running the business.

He was well known and respected within the logging and construction industries, working along with many different companies through the years. He is remembered as a really nice guy and made hundreds and hundreds of friends throughout Southeast Alaska and the Pacific Northwest.

Sandy was a kind and gentle man. He loved his family and was a wonderful dad to his sons, teaching them by example, both at work and at play. He always welcomed the boys' friends along on hunting and fishing trips, and for weekends at the cabin. He enjoyed watching all the sports & activities that his sons, nephews, nieces, and grandchildren were involved in. He adored all of his grandchildren. He spent hours with them playing games, reading favorite books, hunting, fishing, working with tools, or digging in the sandpile ...whatever the grandkids wanted to do. He enjoyed his time with each and every one. He had endless patience and was so happy and blessed beyond words to be a Grandpa.

His loving spirit and huge heart, his work ethic, his dedication and love for his family, are all part of who he was, and who we are, because we were so lucky to have had him in our lives.

Sandy passed away on September 1, 2022 after a horrific battle with Lewy Body Dementia. Lewy Body is a horrible type of dementia that can come on fast with violent hallucinations and progresses very quickly.

We will miss him every single day...our loving husband, father, grandpa, brother, uncle, cousin, and friend...

Alex (Sandy) was preceded in death by his father, Alex; his mother, Mary; and his twin infant brothers, David and Peter. He is survived by his wife, Tracey Reid; his son Andy Reid of Olympia, Washington; his sons Bosjun (Sarah) Reid and Tyler (Olivia) Reid, both of Petersburg; grandchildren Tyson Reid, Levi Reid, Riley Reid, Kori Reid, Sven Reid, and Oliver Reid, all of Petersburg; his brothers Jim (Linda) Reid of Ketchikan, Richard (Peggy) Reid of Ohio, Tom (Vickie) Reid of Arizona, Kent (Shelley) Reid of Arizona; sisters Linda (Merlin) Bell of Petersburg, and Mary Wilma Reid of Ketchikan; and many cousins, nieces, and nephews.

A 'Celebration of Life' Service will be held at Petersburg Lutheran Church on Saturday, October 22 at 11 a.m., with a reception immediately following at the Holy Cross House.