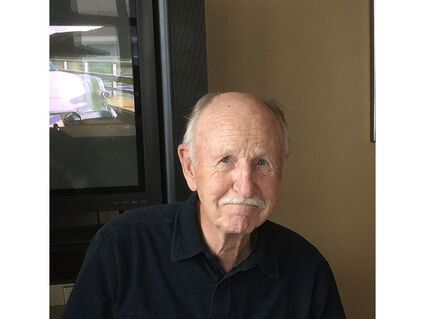 Jim Mortensen grew up in Petersburg and was a graduate of Petersburg High School where he was the smallest member of the band and played the largest horn: a sousaphone. After graduation he and some friends went off to explore the Pacific Northwest. His father shook his head and wondered if the kid would ever amount to anything.

Jim attended some college and then joined the Airforce during the Korean conflict. He met and married Lily Milligan while in basic training in Texas. Shortly after, they were stationed in England, where their two children were born. Upon discharge, Jim took advantage of the G.I. Bill to finish college and go on to medical school. He was the oldest member of his class, the only one with children, and the Valedictorian – sweeping the awards at commencement.

In 1964, Jim moved his family to Ketchikan to start the Ketchikan Medical Clinic where he practiced family medicine, even including pets when needed. In 1979, at the age of 49, he decided to move on to a new career and earned degrees in ophthalmology and anesthesiology. He worked in Bellevue as the anesthesiologist for an eye doctor doing what was at the time cutting edge eye surgeries. He wanted to give back to his childhood home of Southeast Alaska, so through the 1980s and early 1990s he became a traveling opthamologist, visiting Petersburg regularly. His sister Colleen Nicholson was his administrative assistant.

After recurring fights against cancer, Lilly died in 1995. Alone, Jim turned his attention to becoming a good cook, made the decision to retire, and moved to Bend, Oregon where he had a full and happy life. He met Doralee McArthur, a traveling nurse who had spent a lot of time working in Southeast Alaska. They married and enjoyed traveling the world with bird watching binoculars around their necks.

Jim was curious and loved to learn. He put his heart and soul into whatever caught his interest. He earned his pilot's license, learned to identify many birds and their songs, dabbled in the arts, and studied rocks and gems. In a nod to his Montana beginnings, he became an accomplished horseman and, at the age of sixty he took up downhill skiing, mastering the black diamond runs and continuing to ski until age 86.

He was preceded in death by his parents Bud and Alice Mortensen, sister Ruth Rhoden, and his first wife Lily Mortensen.

Jim and his first wife Lily were interned at the Petersburg Cemetery on September 26, 2022.

He was a wonderful father, remarkably accomplished, and kind. He will be missed.