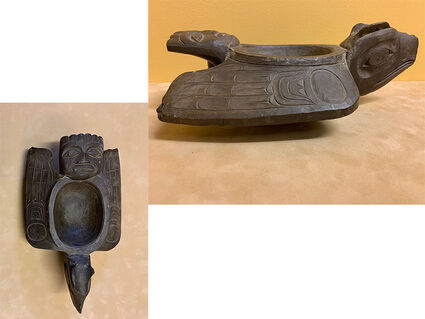 Amos Wallace (Jeet Yaaw Dustaa) the first Tlingit TV star Born in Juneau in 1920, Amos Wallace (Jeet Yaaw Dustaa) was of the T'akdeintaan Clan of Hoonah. Taught carving by uncles and brothers, he soon gained recognition for his skill. New York department store Abraham and Strauss hired him to carve totems in celebration of Alaska statehood in 1958, after which Jack Paar invited him on the Tonight Show. He liked to joke that he was the first Tlingit TV star. Wallace's art can be found at the Smithsonian, Brooklyn Children's Museum, U of A Fairbanks, and even Disneyland. In 1964, Griffins-Alaska made reproduction carvings such as this one, which sold nationally. Donated by Kathy Pool. Information and photos for this column are provided by the Clausen Memorial Museum.