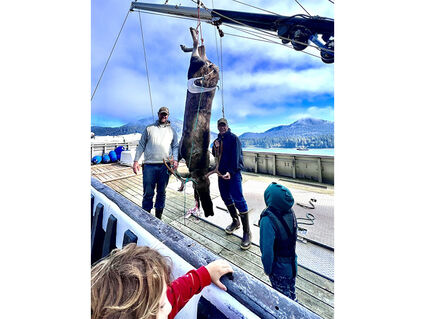 Derek Gibb and Ladd Norheim pose with Gibb's first moose, which was shot on Kupreanof Island on Sept. 16, while Isle and Nolan Gibb climb aboard.

The RM038 moose hunt is staying on a steady pace with 77 moose harvested as of Oct. 5 according to Hilary Wood of the Alaska Department of Fish and Game.

Of the 77 harvested, 70 were legal while 7 were determined to be illegal moose.

The total number of moose taken is just behind the 81 harvested at this time last year.

Hunters have seen by far the most success on Kupreanof Island which has recorded 34 legal moose.

The Stikine River and Kuiu Island are currently tied for second in the legal moose standings with 12 each.

Wrangell Island's number dropped from the four harvested by this time...