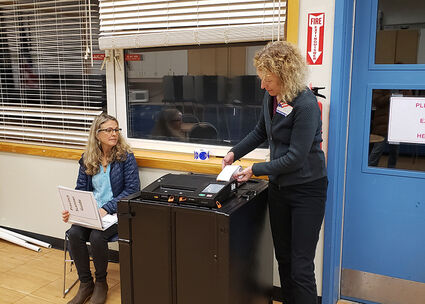 Kathi Riemer and Becky Regula recieve the results of ballots cast on election day from the tabulator.

The long-awaited unofficial results of the 2022 municipal election were released Wednesday evening after early and absentee ballots were counted throughout the day.

According to the unofficial results, Mark Jensen won the mayoral race with 642 votes and will retain his seat.

Incumbents Jeigh Stanton Gregor and Chelsea Tremblay both lost their seats on the Petersburg Borough Assembly to newcomers Scott Newman and Donna Marsh.

Newman had the most votes for assembly with 587 while Marsh recorded 519 votes.