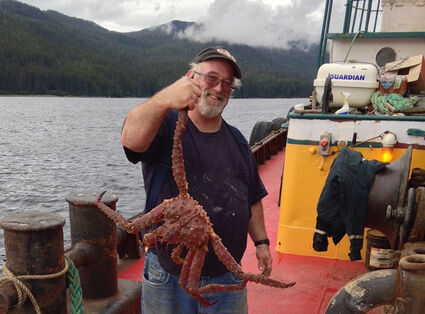 Peter O. Ellert, longtime resident of Petersburg, Alaska passed away on September 22, 2022. Pete was born on November 26, 1959 in Holyoke, Massachusetts and grew up in Blandford, a small town in western Massachusetts. He graduated from Gateway Regional High School in Huntington, Massachusetts in 1978 and immediately joined the United States Coast Guard, serving from 1978 to '81, he was stationed in Ketchikan and Petersburg, Alaska. After serving in the Coast Guard, Pete fell in love with and settled in Alaska and stayed for 40-plus years. He worked as a logger, a fisherman, and then for the Alaska Marine Highway System until his recent retirement.

Pete was an avid New England sports fan and watched the Patriots and his beloved Boston Bruins every chance he got. He often threw his hat into football pools as he rarely turned down a good wagering opportunity!

Pete was a rugged individualist, and Alaska was the only place that suited his free, independent spirit. Despite the distance, his adoring sisters, brothers, extended family and friends had the wonderful privilege of knowing him as a hilariously funny, sweet, gentle, loving and sentimental soul that was endearing and eternal. We are profoundly grateful to have shared memories with him. Particularly his sisters and brothers, who cherish memories of growing up with him exploring the forests and wetlands of western Massachusetts, catching frogs, fishing and witnessing the grandeur of the New England fall foliage that he loved so much.

His younger years could be described as impetuous and raucous, but he later mellowed, developing a great love of reading, watching documentaries, and spending contemplative time listening to his favorite music and enjoying the peace of his cabin overlooking Frederick Sound and LeConte Bay. He seemed to relish the ability to escape to his cabin and live off the grid for months at a time, periodically returning to town to reconnect with the world. Thankfully he adapted to the technology of texting, which brought us closer to him, sharing a quick hello, an update on playoff standings, or a funny meme. Pete loved Petersburg, the outdoors, fishing, hunting, wood working, and cooking. He lived life to its fullest, never missing an opportunity to crack a joke. He truly valued visiting with his family and friends, sharing a cold

brew, and good conversation. He will be sorely missed

by all who knew and loved him.

Pete is predeceased by his parents, Ronald and Eleanor Ellert, and is survived by his six siblings: Barbara Trongone, Jill Ellert, Daniel Ellert, Gwen Galpin, David Ellert (his twin), and Amy Maxner; as well as thirteen nieces and nephews – all who adored him.

A memorial service will be scheduled later to celebrate his life.