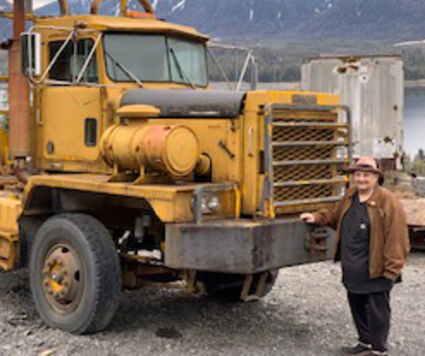 Richard Keith Burrell was born on February 11, 1949 in Lebanon, Oregon to Loren (Dick) & Doris Burrell. He was the second child in a family of six.

Richard's father owned a logging company and the family traveled the West Coast logging. They settled in Eureka, California when he was one and spent six or seven years there before moving to Chilliwack, British Columbia for two years and then on to Campbell River, British Columbia. He said the Campbell River part of their adventure held some of his best memories from growing up.

He was fourteen when his family moved to Petersburg, Alaska in 1963. Richard fell in love with Petersburg and spent the remainder of his life here. He was twenty when his first daughter Gina Rachelle Stafford was born in 1969, the same year he was drafted into the Army. He attended basic training at Fort Lewis, Washington followed by advanced infantry training at Fort Gordon, Georgia before serving with the 588 Signal Company in Vietnam.

After Richard's Vietnam tour he returned to Petersburg and worked as a logger, a welder for Mike Durbin building boats, and an equipment mechanic before eventually getting started in road construction. Though he tried his hand at king crab fishing with Bud Samuelson on the F/V Theresa Marie in 1979, that was short-lived-he said he was seasick for the entire five months he was a fisherman.

Richard married Sharon Wikan in 1971 when he was 22 years old and they had four children: Audrey, Katrina, Sigmund, and Miranda Burrell. In 1980, at 31, he purchased Rock-N-Road Construction and became partners with Fred File. He worked on multiple road projects from Hoonah to Ketchikan and all throughout Southeast Alaska. His favorite jobs were building logging roads and operating the bulldozer.

In 2002, he married Luba Gladnikova from Russia.

After 36 years of owning Rock-N-Road Construction, Richard decided to retire in 2016 and sold his company to his son Sigmund Burrell.

Richard enjoyed Petersburg and all the outdoor activities it offers. He loved driving snowmobiles and four-wheelers-really anything that was fast and had a big engine. Halibut fishing with his family was a favorite activity, and while fishing with his cousin Galen Burrell in 1995 he landed his biggest catch: a 343-pound halibut on a 30-pound test line.

He was an avid gun collector and loved hunting with his brother Steve Burrell and his friends. In 1998, he shot a Sitka black-tail deer on Zarembo Island. His score for the deer's rack was 118 ⅜, which won him second place in the 2013 North American Big Game Award for the Boone and Crockett Club. He was a member of the Elks Lodge, Lutheran Church, Sons of Norway Hall, and the Planning & Zoning Commission.

In his later years, he liked gardening and baking–especially perfecting his cherry and rhubarb-raspberry pies. In addition to his hobbies, he loved to count his money–specifically his $100 bills. We even found a couple of pictures on his phone of his $100 bills all lined up and he still has one bill in his wallet today! Richard was a dog lover who had eight dogs throughout his adult life; three of them were black labs.

After fighting a long hard battle with cancer, Richard passed away in Petersburg on September 22, 2022.

He was preceded in death by his parents Loren and Doris Burrell and his daughter Miranda Burrell. He is survived by his daughters Gina Stafford, Audrey Burrell, and Katrina (Aaron) Miller; his son Sigmund (Amber) Burrell; his Lil' Terror Per Dog; his grandchildren Jordan Stafford, Dylan Barger, Sarissa, Rikka, and Mette Miller, Kyla and Kaitlin Willis, and Svea and Brandt Burrell; his great-grandchildren Leland Barger, and Noelle and Jimmy Craig; and his siblings Linda (Jim) Reid, Sharon Surette, and Steve (Desi) Burrell.

He is at peace now and is missed and loved by many.