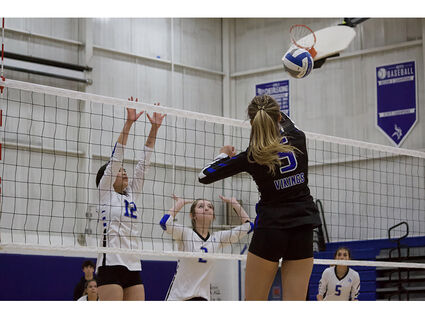 Iris Case sends the ball over the net as Ashley Eilenberger and Novalee Thomas attempt to block and Mattea McCollum stays set.

The Petersburg High School volleyball team had a false start to their season last weekend after the Juneau-Douglas High School team was unable to fly down due to fog, but that did not stop the Lady Vikings from getting some time on the court.

The junior varsity and varsity teams each put on blue vs. white games where the teams were split in half and played best three out of five sets.

"Our officials were here so we had our officials do it like normal, had to run their rotations, the whole works, everything, and it went really well," Coach Jaime Cabral said.

Though the scrimmages were agains...