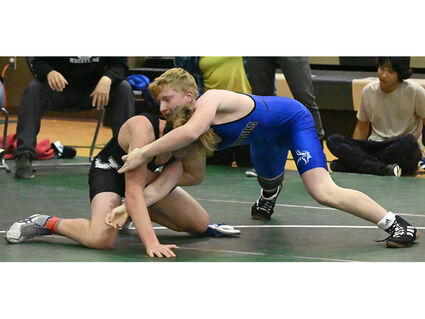 Marcus Anderson works to get leverage over his opponent.

The Petersburg High School wrestling team traveled to Haines last weekend for its first test of the season.

The invitational consisted mostly of round robin matches which offered students multiple bouts against a range of opponents.

Coach James Valentine said the focus of the competition was to give students as many good matches as possible against Haines, Ketchikan, Thunder Mountain, Hoonah, and Skagway.

There was, however, some time Saturday evening for the famed spotlight matches which closed out the competition with some added excitement.

Valentine reported that the Vikings executed the...