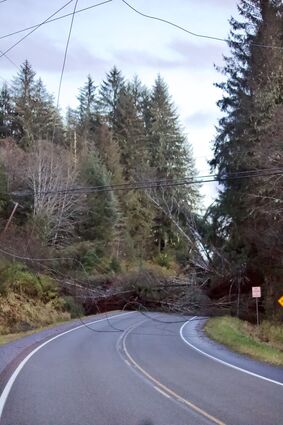 On a night where ghosts and goblins roam the streets, Petersburg residents had a bigger problem to worry about.

A landslide occurred near 5.5 Mile Mitkof Highway on Monday around 4:30 p.m., damaging power lines and taking down trees to completely block the road.

The slide left downtown Petersburg without power and a row of cars waiting along Mitkof Highway to see if they could get home for the evening.

According to Fire Chief Jim Stolpe, firefighters searched the area around the landslide and there were no reported injuries and no damage to any buildings.

The houses in the area near the landslide were also evacuated in case of additional sliding.

According to the borough, one SEAPA pole is destroyed and another is damaged.

The damage has also broken Petersburg's connection to SEAPA hydroelectric power and to the Blind Slough Hydroelectric Plant.

The borough stated that Petersburg will be on diesel power for an undetermined amount of time and that it is highly likely that customers south of the landslide will not have power until the SEAPA line is repaired.

Power was returned to downtown Petersburg around 6:30 p.m. Monday.

The borough also announced that SEAPA has mobilized its emergency line crew from Anchorage, which will arrive Tuesday afternoon.

According to Sgt. Cody Litster with the Alaska Wildlife Troopers, once the power lines are cleared, then work will begin on clearing the road.

There was no estimated time for when the road would be cleared but residents could still use Cabin Creek Road to bypass the downed trees and mud on the highway.

The borough advises residents not to drive to the landslide as the crews, including Public Works, PMPL, and ADOT, work to clear the site.

The borough will provide updates as they come.

According to the borough, Mitkof Highway was cleared around 1:30 a.m. on Tuesday and though it is open to traffic, ADOT is advising extreme caution as there is still some debris and ice on the road.

There could also be additional road closures as utility crews work to repair the power lines.

The borough stated Tuesday afternoon that the generators are running and hydroelectric power is back online.

Power has been restored for most customers apart from those from 4.8 Mile to 6.7 Mile Mitkof Highway according to the borough.

Parks and Recreation is also offering free showers to anyone without power until Friday or when power is completely restored.