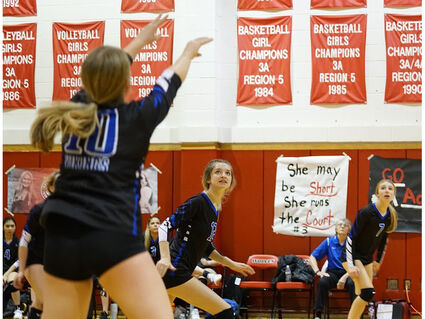 Novalee Thomas and Iris Case get in position as Anya Pawuk sets the ball.

The Petersburg High School volleyball team has stayed busy these last two weeks with students competing in both the Juneau Invitational Volleyball Extravaganza and the South Seeding Tournament in Wrangell.

Before the JIVE tournament, the Lady Vikings also had a warmup match at Thunder Mountain, which the hosts won, in what was a great test against a very good team according to Coach Jaime Cabral.

"For our first game of the year to be against them it was a challenge for our girls," Cabral said last week.

"It was a lot faster, a lot bigger athletes than we had for this weekend, but really goo...