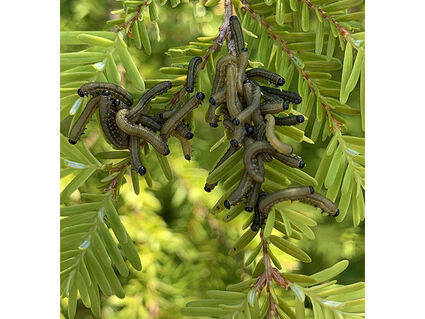 Photo courtesy of Elizabeth Graham of the USDA Forest Service

Hemlock sawfly larvae feed on the needles of western hemlock.

Since 2018, an ongoing insect outbreak has been killing the foliage of hemlock and Stika spruce in the Tongass. The Wrangell area is among the most affected.

Though residents have expressed concern at the island's gray and red-spotted hillsides, state entomologist Elizabeth Graham shared reassuring news with the Wrangell and Petersburg communities at an online forum last Wednesday. The hemlock sawfly and western blackheaded budworm populations have likely reached their peak, and though the outbreak is widespread, many affected trees have a good chance at recovery as insect populations abate...