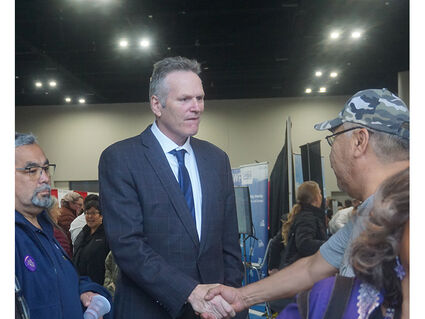 Gov. Mike Dunleavy, standing at the entrance of the Alaska Federation of Natives convention arts and crafts fair last month, shakes the hand of a convention attendee. In votes counted through early Wednesday morning, Alaska Gov. Mike Dunleavy appeared on pace for re-election to a second four-year term.

The election capped a tumultuous term for Dunleavy, who is seeking to become the first Alaska governor to be re-elected since Democrat Tony Knowles in 1998.

Dunleavy's campaign has been boosted by the tailwind of high oil prices, which allowed the first state budget surplus in 10 years and a $3,284 payout to eligible Alaskans. The combined Permanent Fund dividend and energy relief payment was the largest in state history, without adjusting for inflation. With inflation, the PFD was the sixth-highest and the combined payout was the second-highest.

Gara and Walker have argued that similar surpluses in the past have not lasted. In their campaigns, they said that when oil prices fall, Dunleavy will revert to either the deep cuts to state services that he proposed in his first budget or call for unsustainable draws from the Alaska Permanent Fund, the oil wealth fund that lawmakers have hoped would help sustain the state in perpetuity.

Dunleavy's proposed 2019 budget cuts prompted an unsuccessful campaign to recall him from office, and he has not returned to the proposals.

In the days leading up to the election, the Dunleavy campaign focused on themes he's highlighted throughout the year, including a drop in reported crimes, the large PFD, and his support for the state's resource industries.

Speaking on a pre-election show hosted by the Alaska Landmine website, Dunleavy said, "I would like to think we connected with the everyday Alaskan. ... Our values reflected their values when it came to things like crime."

During his campaign, Gara pledged to balance the state budget and strengthen state services by increasing the amounts oil companies pay in taxes. Walker talked about striking a balance that would avert deep cuts or taxes – he said he wants to finish the deficit-cutting work he started when he served as governor from 2014 to 2018.

Along with Knowles, the only other Alaska governors to serve two consecutive full terms were Democrat Bill Egan and Republican Jay Hammond. Egan won a nonconsecutive third term, while Republican Walter Hickel won nonconsecutive elections in 1966 and 1990, though he left before the end of his first term to join President Richard Nixon's cabinet.

Thousands of absentee and early votes remain to be counted, but even if Dunleavy finishes below 50% among first-choice ballots, he remains likely to win outright.

Republican Charlie Pierce is running fourth in the race and would be eliminated first if ranked choice sorting takes place. Many of Pierce's voters likely picked Dunleavy as a second option.

Pierce ran to Dunleavy's right, but struggled to gain traction. He is accused of sexually harassing a former executive assistant when he served as Kenai Borough Peninsula mayor.

Gara and Walker sought to finish second in the first round of counting in this year's election, and each to draw nearly all of the second-preference votes of the other. Winning would require them to make up substantial ground from the ballots that hadn't been counted by early Wednesday, including 14 precincts in northern and western Alaska and the absentee and early ballots.