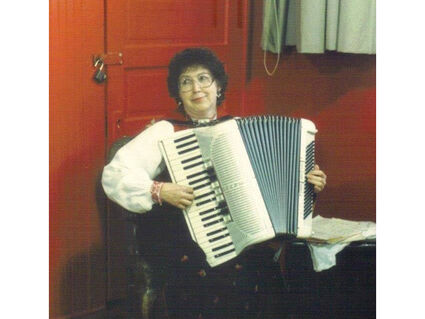 Sigrid Medalen passed away peacefully on October 12, 2022 after a short illness.

Sigrid Carol Dokken was born on March 8, 1931 to Syvert and Clara (Oium) Dokken, one of 7 children. She grew up on their family farm along the Mouse River at Towner, North Dakota. She attended school through eighth grade in a one room country schoolhouse.

After graduating from high school in 1949 in Towner, North Dakota Sigrid went to summer school in Minot, North Dakota and got her teaching certificate. She taught first through eighth grades in two different one-room country schools in the region.

While teaching several Medalen children in Barton, North Dakota she met Harald Medalen. He had recently emigrated from Norway and had been fishing in Alaska. They were married in 1955 and Harold brought her to Petersburg where they made their home for the rest of their lives.

In 1965 Sigrid began working as the receptionist at the local health center, a job she greatly enjoyed until her retirement. While working there she and health nurse Bea Espeseth began playing music once a week for the old timers at the hospital's long term care wing. Sigrid came from a musical family and was an accomplished pianist and accordionist, playing solely by ear. Sigrid faithfully played music at the hospital every Tuesday for more than 40 years. She was active in the Sons of Norway and Petersburg Lutheran Church. She volunteered with the Hospital Guild and as a poll worker at elections.

Above all, Sigrid was unfailingly cheerful. As well as being a musician, she was an avid carpenter given the opportunity, a bit of a gardener, a dedicated berry picker, an occasional root beer brewer, a seamstress, a prolific bread baker (Grandma had a bread drawer, not a cookie jar), and a master of rullepolse, sylteflesk, lefse kling and many other Norwegian delicacies. The coffee pot was always on at the Medalen home and visitors were always welcome. There was always room for another plate at the table.

Sigrid was skeptical of Petersburg when she first arrived but grew to love it and wouldn't have wanted to live anywhere else in the world. She considered herself fortunate to have all her children living in the same town.

Sigrid was preceded in death by her husband Harald, her parents and her siblings and many good friends. She is survived by her children Karen Olsen, Harold Medalen, Mike Medalen, Kirsten Dupree and their spouses, 9 grandchildren and 2 great grandchildren.

As Sigrid wished, there will be no service. Memorial contributions may be made to The Petersburg Volunteer Fire Department EMTs, Box 75, Petersburg AK.