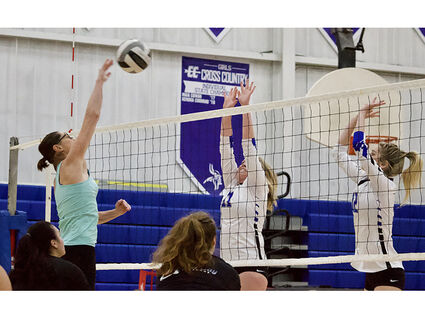 Alysa Thomassen and Novalee Thomas jump up and attempt to block an incoming spike from Jen Wellner during the first set of the varsity-alumni scrimmage.

Petersburg High School alumni returned to the court Tuesday night for a scrimmage against the varsity volleyball team in what was their final home game of the season.

The alumni swept the students in three sets, going back and forth in the first two to narrowly claim victories and running away in the third set with a 25-15 win.

After the match, Coach Jaime Cabral honored Coach Bev Siercks who is retiring after 43 years of coaching in a multitude of sports.

Coach Bev initially retired in 2012 but returned to the volleyball team in 2015 after Cabral asked her to come back.